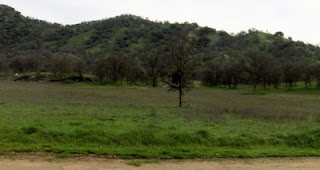 Today was busy, but fun. This morning Andy and I took a drive up to Three Rivers to my dad's property just to check everything out. We also had a contractor meet us up there to take measurements and to give us an estimate on what it would cost to remodel the house if we were to buy it. And believe me, we would not buy it unless we can afford to remodel it. The property is nice, and although it's only 5/8 of an acre, it is right on the river. Of course, that means it will cost a lot more to buy, too! After that, we came home and did a little cleaning around the house. It was overcast today, but still nice enough to work outside in shirtsleeves.

This afternoon I went to play bunco with a group of ladies, which was actually a fundraiser for a group called "Young Lives." The program used to be called "Mentor Mom's" and was developed by our former pastors wife. It is a program that pairs christian women with unwed teen moms and gives the support, training, and encouragement. It is a great program, and at some point, I would like to become a mentor in the group. This is the same group that I worked with a month or two ago and taught some of the girls how to make pajama pants.
After bunco, I wanted to cut out a skirt. Yesterday, my daughter left the iron on (or it might have been on for 2 days!) and it was scorched totally black. I used almost a whole tube of iron cleaner, canola oil, and steel wool, but it still kept turning the towel I was cleaning it with black. I finally gave up. "Gee," I figured, "this would be a good time to set up the gravity feed iron that I bought last summer and never put together!" So, that's exactly what I did. I now have my gravity feed iron up and am finally getting the hang of how to use it. It does take a little getting used to. I do have to say that I am totally into the teflon plate cover and wish I would have bought one of these years ago to fit every iron I've ever owned. What I like about it is that it has tiny holes all over it, so it spreads the steam out more evenly. Also, it does not leave the hole-marks that a regular steam iron often leaves if you leave your iron in one place very long. Well, it took awhile to get that set up, but I did get my pattern pieces altered.
After that, we met my brother and his S.O. and had pizza and listened to a local blues band. They were OK, and even though I do like blues, it gets kind of monotonous after awhile. We left after they finished the first set. I think they had turned up the volume at least 3 times before the set was over - and it was only 8:00. Everyone will be deaf by 11. It's a small pizza parlor.

Anyway, I actually DID cut out the skirt when we got back from pizza ( which is probably another reason I didn't want to sit through another set of the blues! I feel like I haven't sewn anything in forever, so at least I got this done! I am making a skirt, Simplicity 9825 in the long, fuller version for my trip to Uganda. I am using this pretty cotton print: 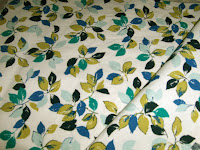 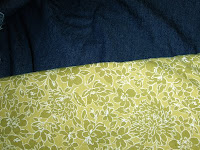 I don't think it will take very long to put the skirt together. If I like the pattern, I may make another one out of denim and add some rivets or grommets.

Next, I will be making the reversible vest from a coordinating print and denim. The camera does not like to photograph the green next to the blue, but it really is more green than gold. It's the same green as in the skirt print. I tried to adjust the photo, but now the denim looks kind of green. Oh well, you get the idea, anyway. I think the vest will be a little time consuming, but after reading the instructions, I'm pretty excited to make it. It has lots of pockets and I think it will be great for the trip.

And, speaking of the trip, I got my shots this week. Fortunately, I was referred to a local doctor who does immunizations at cost for missionaries. This saved me about $200! 15 immunizations, if you count the different strands of some of the viruses! Fortunately, the doc was able to fit it all into 2 needles. Unfortunately, I had an allergic reaction to something and started itching and sneezing. Fortunately, I took an antihistimine as soon as I got home. Unfortunately, by that evening, I had chills and a low grade fever. The next day I had to stay home from work because of chills and aching all over. The day after that, I was sick to my stomach all day. Fortunately, Today I am fine! And... fortunately, as my friend Jason reminded me, this is still better than getting Typhoid! Yes, when you go to Uganda, you have to get immunized against just about everything except Japanese encephalitis. I didn't believe it after I went to the travel doctor, but after checking with 4 doctors, I got all the vaccines. That meant

fortunately I had mumps, measles, and chicken pox as a child, and had a pneumonia shot last year, or I would have had to have had all of those too!

Posted by Nancy Winningham at 10:17 PM

Wow! You were brave to get all those at one time. But at least that part is DONE! Glad you've allowed time to get all the followups done. The good thing is that you probably won't feel as sick after those....

Wow, it looks like things are coming together for the trip! Nice that you were able to find a less expensive way to get the shots done. Your wardrobe sounds perfect and will be good for when you come home,too.

I keep meaning to comment on here and ask you out to lunch....we need to have a nice chat before you are off on your adventure. And did I tell you how much I admire what you are doing Nancy....really!

You have been nominated for the Sisterhood Award!