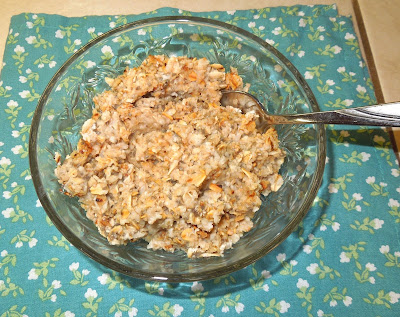 Breakfast is always a conundrum for me.  I know I need to eat a healthy breakfast, but I don’t want to take time to make it.  Also, I am not a big fan of eggs, and I am trying to eliminate wheat and processed foods from my diet.  I will sometimes eat yogurt and nuts, but what else is there?  My husband loves instant oatmeal, but most of the varieties are too sweet for me and the plain is just, well, too plain.  Also, I can do without the added chemicals and other additives.  So, I decided to look for a good DIY instant oatmeal.  After reading several, I decided to come up with my own.  Lucky for me, the first hit was a home run!  I am absolutely loving this oatmeal.  The flavor is unique and delicious!  Here’s how I made it. 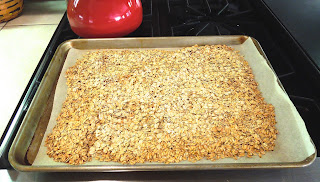 First, take 4 cups of rolled oats and lay them out on a cookie sheet.  I used parchment paper so that I could pour them into another container more easily.  Toast these in the oven at 350 for about 15 minutes, or until they’re slightly golden.  (most of the recipes skip this step, but I think this is what makes it taste so good!) 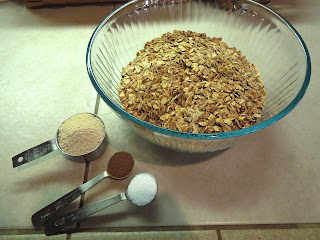 Pour these into a bowl and mix with 1/4 c. maple sugar (I get mine here), 1 tsp salt (I used Kosher salt), 1/2-1 tsp cinnamon to taste.  I used maple sugar because it is less processed and has a good flavor without being over the top sweet.  You could substitute brown sugar, but the maple sugar really gives it a good flavor. 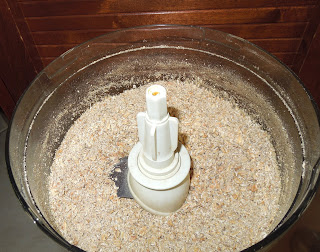 Next, I put about 2/3 of this mixture in a food processor and pulsed it 3-4 times.  This is what gives instant oatmeal its great texture.  I poured this back into the bowl and added 1/4 cup chia seeds. 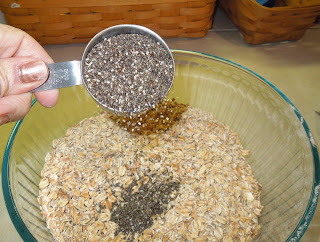 I store mine in a jar, but if you have a family that makes their own breakfasts, 1/2c. will fit into snack size ziplock bags.  Perfect and healthy instant oatmeal packets!

To make the oatmeal, you can use either of these two methods:

I’ve been planning on using the following add-ins, but I’m liking this so much as is, I haven’t added anything yet!  Add ins:  walnuts or pecans, raisins, coconut, fresh fruit, slivered almonds, hemp seeds 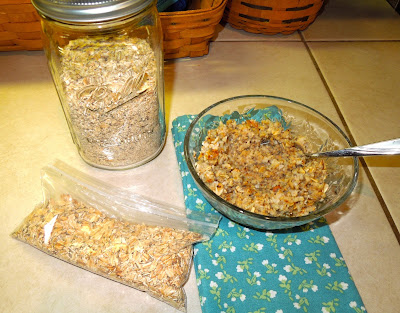 Posted by Nancy Winningham at 9:11 AM 1 comments 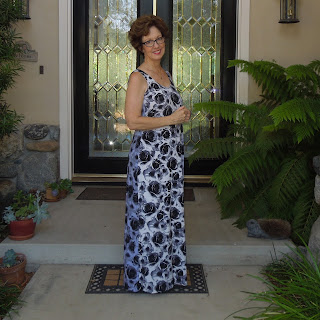 Even though Three Rivers is a small town in the foothills of Sequoia National Part, we are fortunate to have many cultural opportunities.  One of these is Center Stage Strings.  The program began with the Colburn Institute in Southern California, and is now based out of University of Michigan.  Anyway, the quality of the musicians that come to our little town to do concerts  is absolutely amazing.  We had one of these concerts today, so I wanted to make something new to wear. 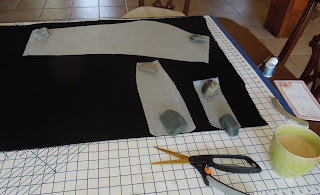 When I was at PR weekend in Chicago, I picked up the Jalie Maxi Dress and Shrug pattern.  After reading Kyle’s review on the shrug, I knew I had to have this pattern.  I have other shrug patterns, but I just really like the way this one looks, and Kyle’s review sold me on it.  My arms are always cold and I can’t stand a fan on my shoulders.  It’s been over 100 degrees every day this week already, so that means air conditioning and fans.  I take a sweater, shrug, or shawl with me everywhere I go. 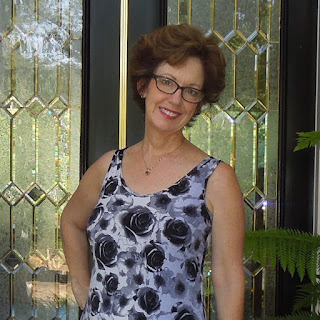 So, I bought the pattern for the shrug, but needed a dress.  It took me longer to trace the pattern than it did to make it!  This pattern is quick to sew.  It will be even quicker next time because I realized after I finished the dress that I did not read the directions correctly for the binding, and I ended up making it more complicated and difficult than I needed to.  But, even so, I really like the way this dress turned out.  It skims the body and fits in the bodice without being too tight.  I ended up making a size larger than I usually do because I am now a size larger than I used to be.  Hope to rectify that soon!  Anyway, I made the dress yesterday and wore it to church this morning.  I cut out the shrug before church and finished it after lunch.  I was able to wear the dress and shrug to the concert this afternoon.  I’m really glad I had the shrug, because it was cold (to me) at the concert, but it was hot outside.  I was able to easily slip off the shrug for the wine and cheese party that was held outdoors at a home nearby.

I definitely see more of both of these in my future! 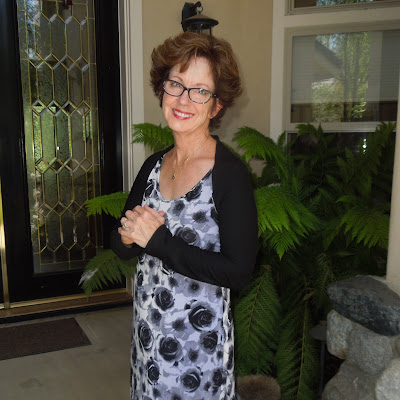 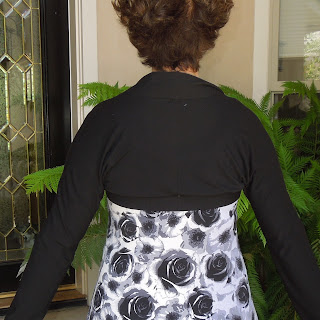 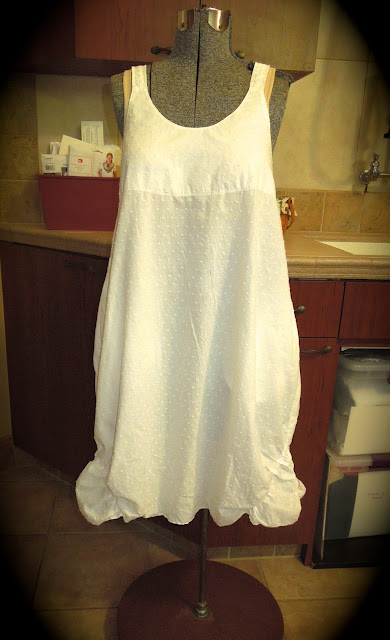 This week I've been working on the Tina Givens Sugar Slip.  It should not take a week to do this, but it did.  First of all,  I did not have enough Fabric.  The pattern called for 1-1/8 yard, so I got 1.25 to be sure.  Well, I think I needed 3 yards!  Most of Tina Givens skirt patterns are cut with a bell shape, which uses most of the width of the fabric.  So, even though my fabric was 50-54" wide, I'm sure that even 60" wide still would have taken more - and I made the small size!

I made mine out of a pretty dotted swiss that I got at Vogue Fabrics on my recent trip to Chicago - so obviously, I was not going back to get more fabric.  I did have some white batiste (also from Vogue Fabrics but online several years ago) that I used to cut out the top half of the back, the back facing (which for some reason she calls "interfacing" and the back of the pockets.  You can see here that I stitched and serged the two sections together.  Unfortunately, the batiste is not as white as the dotted swiss, but I am planning on wearing this under other garments, so it should be OK.  (you ca't really see the difference in color in the picture. 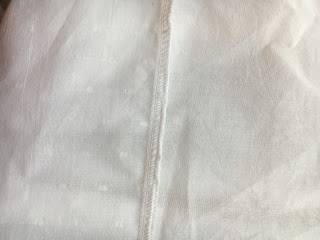 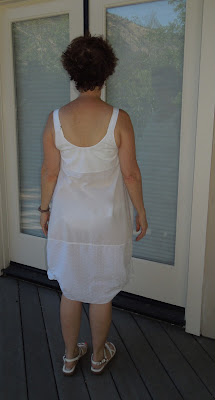 And, as you can see in this photo, it is a bit see-through - so it DEFINITELY will be worn under other things! 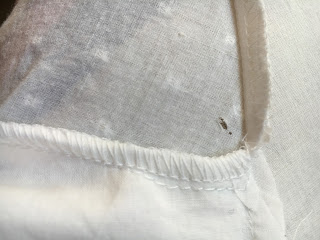 When I was serving the side seam, I accidentally nicked my fabric.  Arghh.  I put a little fray check on it, but it still looked bad.  Ended up making a tab and sewing it over the cut.  I made it big enough to look purposeful.


I like the way this pattern has you sew the facings to the front and back before you sew the two together.  However, it's really tricky to sew around the straps on the inside without catching them.  I think this is because the measurements are off.  Either the straps need to be more narrow, or the bodice needs to be wider where they attach.  Before trimming, there was only scant 1/4" seam allowance space along side the straps where they attach. 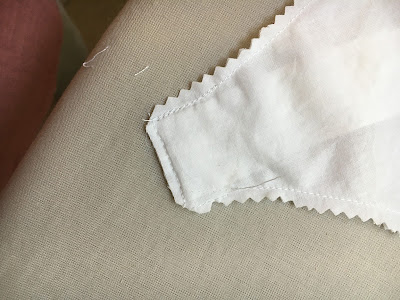 Here's another pattern snafu.  The pockets.  They are ridiculously large on the top and go above where they attach at the sides.  This makes an upper part that keeps falling down when the garment is warn.  I saw this immediately when I put the dress on the dress form.  I decided to cut the upper part off of the pocket and re-sew it.  Problem solved. 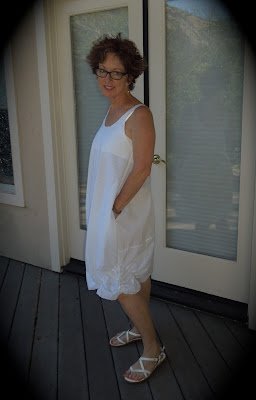 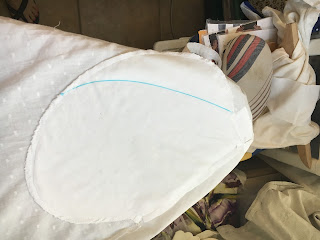 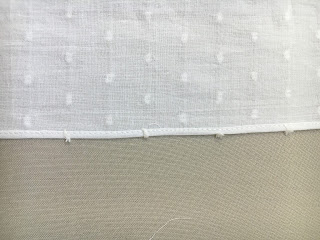 The pattern instructions have you do all the gathering on the sides and sew the rolled hem last.  I think it is much easier to sew the rolled hem before doing the gathering.  It took me a while to learn how to use the rolled hem foot with my machine, but I love what a nice clean finish it gives.  I did still have a couple of places where I had to re-insert the fabric into the foot, but I'm determined to master this one day! 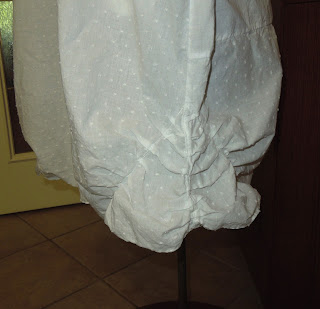 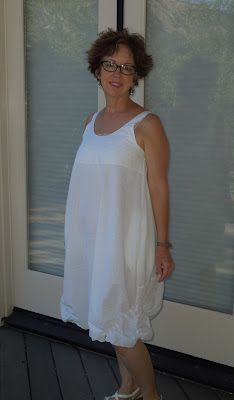