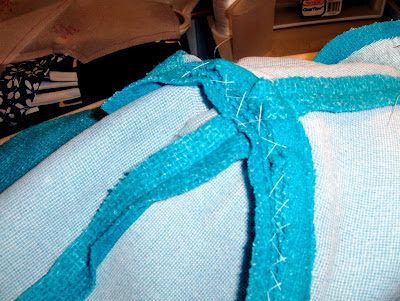 My intent was to cut out my lining today. I decided to first go ahead a take the old lining from the trash and at least baste it into the jacket to make sure the fit was right before I did any cutting. As I was doing this I decided to take the picture on the right to show how I used a bias strip of fabric to ease the sleeve (no puckers) and then pressed it out to create a sleeve head. I also sort of stitched it down lightly since there were so many layers. 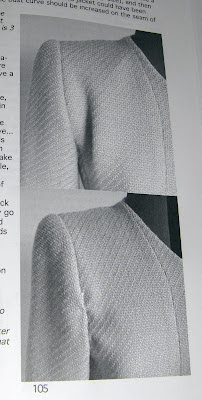 After I put in the lining and tried it on, I realized that I had hollow shoulder syndrome. This sometimes happens on my jackets which I now realize is because I have narrow shoulders. I should have cut the armscye smaller at the shoulder. So I debated - do I take out the hand stitching and try to pick out the double row of stitching for the sleeve? I tried it on again. I remembered seeing this picture in Nancy Erickson's book Sew Imagination Jackets She is always emphasizing how even very small increments of alteration can make a big difference in how a garment looks. Although my shoulder problem was not as pronounced as this picture, it was still noticeable to me. I took out both sleeves from notch to notch, thread basted a line about 1/2 inch in on the front and back pieces and pinned the sleeve. It did make a difference! ** look at the picture in the previous post and compare it to the one at the top of this post. So, I reset both sleeves. That took up my sewing time today but I'm glad I did it. 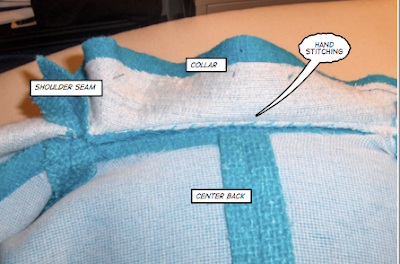 I will be compiling a list of why this is a three dot pattern - but this picture shows one of the reasons. BWOF directions do NOT tell you what to do with the collar after you attach it to the lapels and back facing. I pressed the s.a.s toward the collar to create a better roll line (another trick I learned from N.E. when making her coat pattern) and then hand stitched it to the seam allowance. If you just followed the BWOF directions, this would be loose and not attached to anything except the lapels and under-collar.

OOPS!! The picture is labeled incorrectly. Where it says "collar" it should say "back facing" which is attached to the collar. I'm too tired to go back and fix the picture. Another day - maybe.

Posted by Nancy Winningham at 9:37 PM

Sooo, this totally intimidates me from taking on a jacket. This is fascinating to watch. Where can I look up info on using bias to ease in the sleeve?

Also, I would looove to see a post on your pressing tools. I was just reading last night that there is a difference between a tailor and dressmaker's ham. Yet, I could only find a dressmaker's ham from my online search. I'm intent on getting better with pressing and your items always look so sharp!

I've said it before and I'll say it again - this jacket is going to be stunning. I am going to have to get that book you highlighted. It looks like it has a wealth of information. And thanks for the tip on the seam allowance. I'll definitely use that the next time I make a jacket like this.