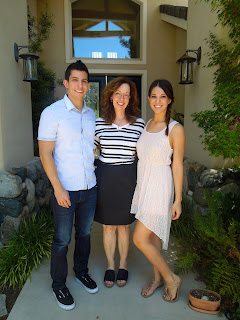 I was thrilled that both my son and daughter came up and went to church with us this morning and spent the day up here.  I am that very proud mother of both of them.

They both left around 5, so that gave me a little time to work on my muslin.  I was stressing my brain trying to figure out how to take that dart out of the armscye.  Since it was about an inch, and I was already taking out an inch and a half for FBA, I did not want to rotate that into the side dart.  It just would have been to big.  If I tried to taper it to nothing at CF, it threw the CF line off.  I tried a few different places, but finally ended up taking it out at the CF on the neckline.  I cut it out of another scrap piece of knit  and the fit is much better!  There is still a little bit of gaping at the armhole, but that will disappear when I put binding on the armholes. 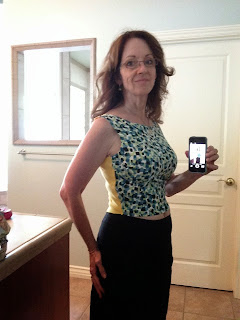 It's hard to tell in the wild print, but the gap is gone at the neck and the majority of the gap is gone at the armholes.  The dart makes the sides lie much smoother and I think the weight of the skirt will pull down the sides enough that everything will hit at just the right place.  I may need to shave a little bit off of the CF, but I will baste the skirt on first and see.  I can see that the side seam is pulling to the front near the waist, so I may need to change the shaping there a bit, as it is not tight in either the front or the back.  Maybe some consistent sit-ups would help change this problem!  The one thing I will need to do is redraw the armhole a little farther toward the arm.  I blended it  in when I took that dart, but I think I may have drawn it too deep.

And THIS is why we make muslins!  I would have been so disappointed if I had used my real fabric and it did not look good!

And, for MMMay, this is one of my favorite skirts.  It is Simplicity 2451.