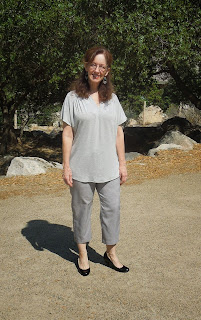 This weekend I got to get a little sewing done.  Yay!  First I made the Hot Patterns Fast and Fabulous LaStrada T-Shirt.  Once again, I was wooed by Hot Patterns!  Actually I bought this pattern and the Blouse Back T awhile ago.  Unfortunately, I cut them both right away, and now I wish I would have waited.  This shirt is really big on me.  I think that HP must be cut fairly large in the upper chest/neck area.  I actually tapered out to a larger size at the hip, but there is still a lot of extra room in the upper chest and shoulder area.

In fact, I will not be able to wear this top without a cami or other top underneath.  The armholes are seriously large, and I went up 2" farther than what the pattern recommends!  I would like to make this again, but I think I will have to go down 2 sizes in the neck.

Also, the directions were sparse on this pattern.  For example instead of telling you to start at the curve and sew up to the notch, (the side seam and sleeve are all the same) it just says "Sew the side seam."  A new sewist would not know to stop at the notch.  As it is, the notch is way too low, but I was afraid to go to much higher because it would restrict movement.  Also, it was very confusing to tell how to sew the upper body to the lower body.  The curves are unusual and either there aren't sufficient markings, or I neglected to put them in somehow.    All in all, it is a cute shirt, but it needs to go with different pants.

I absolutely love the fabric that this shirt is made of.  It is a rayon jersey and is super comfortable.  It is very clingy though, and since it is so long in the back, It gets caught on jeans.  This top needs to be worn with slippery pants or leggings.  I guess if you are slim in the hips (which I most definitely am not) then it wouldn't matter what you wore it with.

The pants are Loes Hinse Ascona Pant.  This is the capri.  Interestingly enough, there is a totally different cut on these than the longer version.  She did the same thing when the Cruise pant was in print.  The capri and the longer pant both used different pattern pieces, including a different crotch curve.  Not sure why that is, but I like the way these fit.  I made these pretty much as is (no muslin) but I will tweak them a bit for next time.  I'd love to make these in a linen blend.  I'm really looking for comfortable fabrics that do not wrinkle much for travel.  I was so inspired by some of these pics from the Louise Cutting fashion show, that I want to add some color to my wardrobe this spring. I have some green linen about the same color as the picture on the right, but linen is so wrinkly that it's not great for travel.  I think the Ascona pant would work well, and I have the cowl vest pattern (CLD Light and Shadow) and top shown with it. 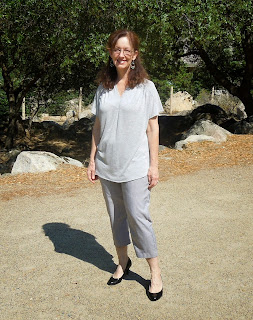 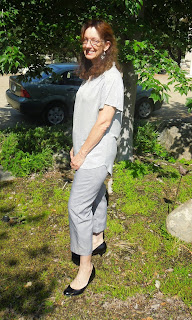 I think I'm going to give this top another shot.  I know I will make the pants again - super quick and comfortable.  But the top.  Well, we'll see.
I see that Cidell has recently made a couple of the HP Blouse back Ts.  Apparently she is having much more success with Hot Patterns than I am!

Posted by Nancy Winningham at 10:07 PM