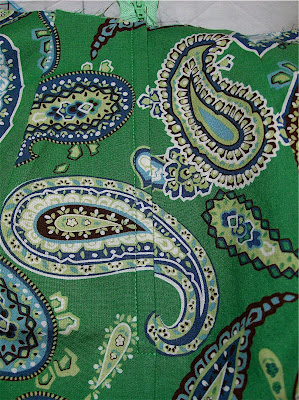 Well, I hate to say "every"time, because, sure enough, the next time I do this I will have to rip it out! BUT, this is definitely my favorite zipper application. And for me, it comes out great every time and is much easier than invisible or centered. I have tried several different methods for doing the lapped zipper, but my favorite method is the little direction sheet that comes inside the Coats and Clark zippers. If you've shied away from lapped zippers, try this method and you will be hooked. In order to get a straight stitching line, I used 3/4" scotch tape and drew a line right down the center of the tape with a pen. I then put this line on the seam line and stitched right next to it. This worked better for me than using 1/2" tape, since sometimes the 1/2" doesn't catch the full seam allowance in the edge. Also, I always use a longer zipper than it calls for and then cut off the top after I sew on the waist band or facing. Did you hear me? I said "AFTER!" Do not cut it off before, or you might do something stupid like try on those pants or that skirt and forget that the top is cut off and then you'll pull that zipper tab right off the zipper. Not that I know anyone who has ever done that. Twice.

Anyway, what am I making with this bright green paisley? Well, I was inspired by Cidell, Carolyn, Marji, and Lindsay's skirts, so even though I wasn't invited to the party (LOL) I decided I was going to jump on that bandwagon too. And here's another reason I love BWOF. Their "skirting around" large print skirts were inspired by a recent issue of Lucky Magazine. Now we all know that Lucky has the latest and greatest trendy looks. However, when I decided to look through my collection of BWOFs to decide on a pencil skirt pattern, look what I found from March of '08. That's right, large floral print pencil skirt. I've always felt like BWOF was ahead of the trends, and I'll bet if I look back in earlier issues, I'll find similar styles! Anyway, after much looking around, I decided to go with my old standby (yes, I have a TNT!) skirt pattern, MCCalls 3830.

I suppose I could have matched the print better, but I figure this is good enough. I really wanted to find a larger print, but there were none to be found locally. I still think this will be a cute skirt.

Posted by Nancy Winningham at 10:00 PM

Love the paisley print, I think you matched it great.

Oh, I love the fabric! Paisley is one of my favorites. That green will look wonderful on you, too.

You could have matched the print better? You must be a magician because I think it's perfect just the way it is!

That's a great print and you matched it very well. As for the zipper--yep, I've ripped the zipper pull right off the zip more than once! Drats!

The fabric is gorgeous and the match looks perfect to me. This will be a darling skirt.

I think you matched it great. I am encouraged to try a pencil skirt in a large print, now.

Your zipper does look great, as does your pattern match. i agree those instructions are the best.
So happy you were inspired to create your own,...and we were kind of hoping that would happen.

Love that print, can't wait to see the skirt!

Beautiful zipper application and great fabric! Guess I need to dig out a big print too!

Only pulled the zipper slide off twice?! I wish I had your track record. I've done this more times than I'd like to recall.

Your skirt is going to be beautiful! Love your lapped zipper.

I love how you matched up the paisley print at the zipper! And the print is very pretty...can't wait to see you in it! Glad you accepted the challenge to make your own trendy bold printed skirt!

Love the print! I am going to make my own large print pencil skirt now... 'cuz I want to be part of the gang. :) Your lapped zippers look nicer than mine, though- I might put in a different version.

love, love, love that paisley...in my favorite colors too!

BTW...I too have been using the lapped zipper instructions from the package..for years. Works for me! In fact, I doubt I could learn a "new" method after all this time... :)

Oh my Gawd! I don't see how you could have matched it better. it looks perfect to me.

I love your fabric! Nice zipper installation too. :)

You matched the print perfectly! I haven't done a lapped zipper in years, but I'm going to take another look at the method.

Are you a fly on my wall? I JUST made this skirt and posted that it's my TNT pencil skirt pattern. Yours is fab, by the way.

That is a perfect lapped zipper and look at how the print matches! I've been buying the zippers that are not packaged, I need to seek out one of those Coats and Clark zips so I can read their directions.