I've been wanting to do a post on how people dress in Uganda. The thing that struck me most was the fact that people were surprisingly well dressed. Even in the slums of the city, everyone always looked clean and their clothes looked freshly pressed. You would see women working outside or cleaning steps in a dress. Women mostly wear dresses or skirts, and you only see pants on occassion in the bigger cities. When you do see women wearing pants, it is usually at matching pant suit. It also surprised me how much clothes they wear. Men and women often wear long sleeves, even though it is VERY hot there. (never mind that the thermostat says 80 something - it definitely feels high 90) Everybody irons their clothes there, and when the electricity goes out, they use charcoal powered irons. 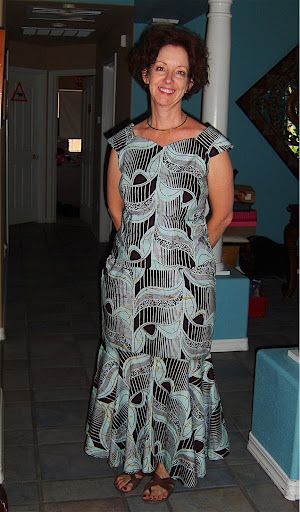 One of the dresses that you see a lot of in Uganda is called the kitinje (in English it is pronounced ka-teyn-gay and in Swahili it is pronounced something like ka-tinge-eh) It is very tight fitting in the bust, waist, and hips. There are many different styles, but most are close-fit. Some of the other mazungus (white people) and I went into the garment district and bought fabric. The wax print cottons are the "official" fabric for kitinjes and I picked up two beautiful pieces. I also picked up another piece of fabric that I thought would make a cute skirt, but I was informed that this fabric is for wraps - sort of like an apron- only. They laughed at some of us because some of the girls picked out shiney polyester fabric and wanted kitinjes, but that fabric is supposed to be used for the gomez, another type of dress that is actually the native dress of Uganda. Fortunately, all of the Ugandan women I was working with approved of the fabric I chose.
After I picked out fabric for the kitinje, we had a seamstress come over and measure all of us. There were 4 women and we each had a dress made. Well, I had A dress made. Mary had 3 dresses made and Rae had 2 dresses and a man's shirt. Loring had only one dress made as well. The lady who made these clothes for us finished all of this in less than a week! It is interesting to see how she made the pieces. For example, the bodice front and back are lined separately and then sewn together at the side seams. This was nice since I had to take out the side seams quite a bit at the bust and hip, as well as taking it in in the shoulders. I think it looks pretty cool.

In all of the clothing shops and shoe shops that we saw, they had only used clothing and shoes. I wondered where the new ones were sold since they had to get "used" somewhere. Well, apparently, the US sends over things that don't sell in the GoodWill and Salvation Army stores and then they are sold in Africa. So, you see people wearing logo clothing and having no idea what the logos say, let alone what they may mean! Sometimes the clothing is nice, other times it is not. As I said before, most of the people (adults) in the city dress very nicely. In fact, I felt like I was not dressed well enough most of the time. However, in the villages, it is a different story. Most of the time the people are wearing very ragged looking clothes because they may only have one set of clothes per person and they wear it until it wears out. Most try to dress as nicely as they can. So, you either see people wearing Salvation Army clothes, or the native dress, which is called the Gomez. The Gomez is identifiable by the big puffy sleeves and usually many layers of fabric that may or may not wrap around the body a couple of times. They are usually long to the ground. You see womenn going to church in these dresses, but you also see women cleaning, cooking and doing field work in these dresses too. They are always very colorful and are usually made out of cotton or shiney polyester fabric. The girls on the worship team were calling them "prom dresses"

This woman is wearing a Gomez 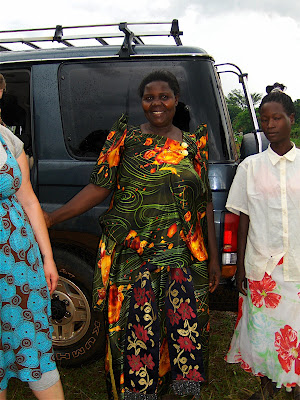 This is typical of what you will see people wearing in the villages unless they are wearing a gomez. 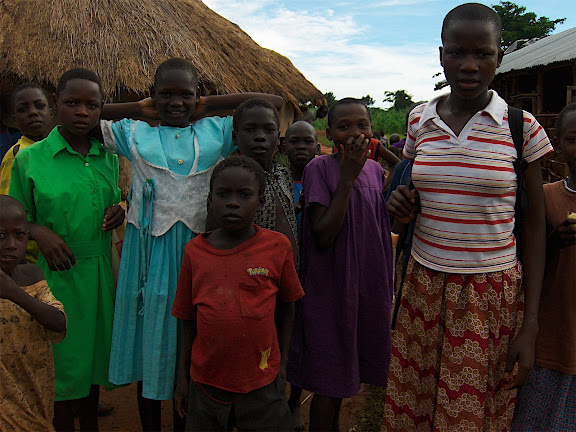 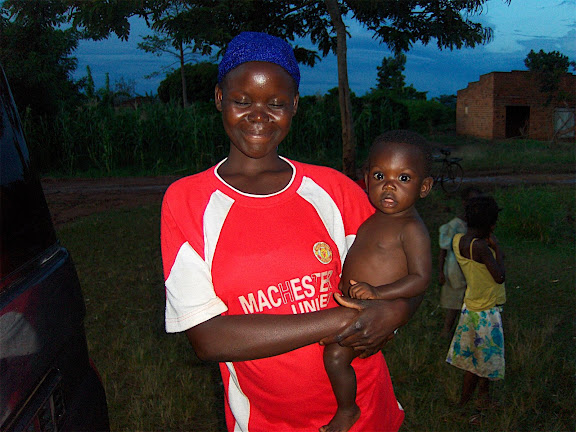 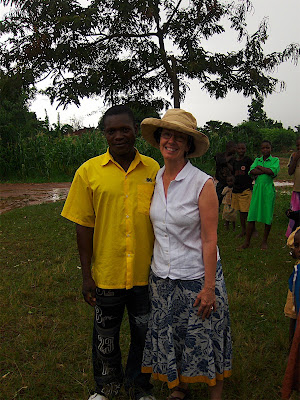 This is me and the gentleman who helped translate for us in the village. He was wanting to pastor his own church, but said he could not because he could not afford a PA system. In Uganda, if it's not loud, its not happening.

Whether in the cities or the villages, the children wear uniforms to school. They wear their uniforms every day and seem to have pride in having the uniform for school. Every school has a different color combination and there are LOTS of schools, because there are LOTS of kids everywhere. 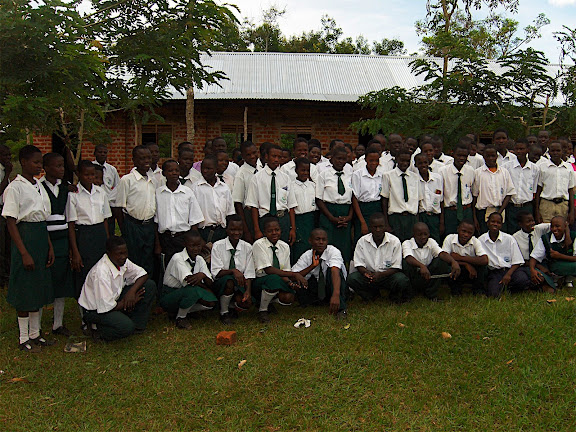 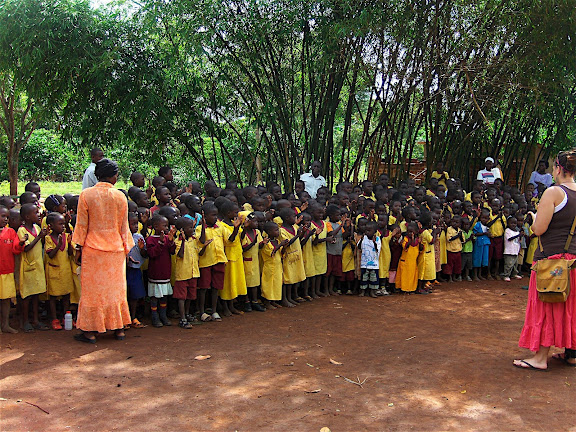 Clothing was interesting in Uganda, and you really saw pretty much anything anywhere. You would see women wearing sequins and beaded dresses to the same event that they may have worn and old skirt and tank top to the day before. They seem to wear "dress up" clothes (if they have them) even for every day events. It is easy to get clothes made there and cheap too. There are lots of seamstresses in the cities and treadle sewing machines everywhere. I wonder if I could find a Singer featherweight there...

Nancy, your dress is beautful on you. I love the fabric. Isn't it amazing how the women dress in other cultures? In India either the sari or salwar shameez was worn by everyone. You almost never see a woman wearing something else. And they are both colorful and graceful, but I'm sure to us it would seem impossible to do the tasks they do in them without coming all undraped. Washing clothes in a river, cooking at a fire on the ground, caring for babies, all of that in the beautiful dress.

You look very regal in your kitinje! Great post - your "sewers-eye view" is very informative.

What a neat dress! It is amazing what a different culture it is there isn't it? And in all the pictures I ever see, everyone always looks so happy.

...and the dress is beautiful!

Thank you for that lesson. It was very interesting.

Very, very interesting. Thank you for taking time to share!

Nancy - I enjoyed your comments about the dress of Ugandan women. I've recently returned from Vanuatu. The women there are always clean and tidy and well pressed - they put me to shame I'm sure - and they wear "mother hubbard dresses" which is what the missionaries originally dressed them in I suppose. Very colourful, very cool and fairly modest. I sometimes felt like donning one myself they were so pretty.