I better love this skirt!

I started making this skirt over the weekend and I better be loving it because it sure is a PITA to make. First of all, there are 18 pieces! That's right 8 yoke pieces, 3 skirt pieces, 1 waistband, 2 bottom band, and 4 pockets. And the worst part is that most of them have to be single cut! I'm pretty sure that it took me over 2 hours to cut this out. I could have done it faster with the rotary cutter, but I've been trying to get better about using my scissors. Still, I think it is more accurate to use the rotary for most things since it does not lift the fabric the way scissors do. Also, all that pinning takes a LOT longer than using weights and rotary cutting.

I had exactly the amount of yardage suggested on the envelope (1-7/8 yd) and there were only small scraps left over. No room for mistakes here. Good thing I had already prewashed this fabric. I'm using a soft-white linen-look poly/rayon blend. I've used this fabric on another top once before and liked it, so I'm hoping I love this skirt. I'm kind of wishing that I would have lined it, but it's kind of too late now unless I hand stitch it in. I'll probably just wear a slip if it needs it. I think the style looks really cute, but I have no idea what it will look like on me. This is what I've done so far 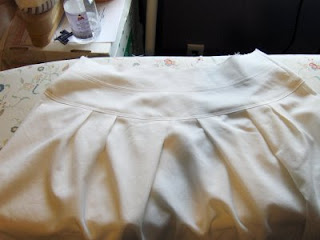 This skirt is also very time consuming to make. There are several rows of topstitching, which I don't mind usually. I use a 14/" foot or an edgestitch foot to topstitch because they each have a "rudder" that runs along the seamline that makes the stitching stay much straighter. Unfortunately, there are pleats on this skirt, so when topstitching the bottom of the yoke (two rows) the rudder kept getting stuck in the pleats, so I had to lift the presser foot every time I came to a pleat. Front and Back of the pleat. Next I am going to sew in the zipper, but my back is hurting me today, so now that I finally have time to sew, I'm not doing it. 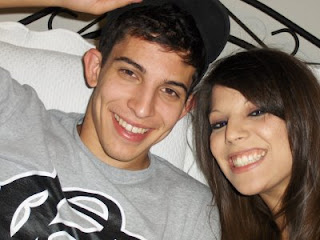 Yesterday was a fun day. I was so happy because Nick came over. I hardly get to see him now that he is living in Fresno, even though it is only an hour away. Between school and his work schedule (and social life, I'm sure) we don't get to see him much. He came over in the afternoon and he and DD Grace were laughing at me taking pictures of them. We all went to a great resaurant called Fugazzis and had dinner. I had a great spinach salad with grilled shrimp on it. After dinner we went on a hunt for a water gun. Friday is water day at my school and it is lots of fun. We rent a bounce house, water slides, slip and slide and have other things like relay races, obastacle course, face painting etc. Every year this one teacher has a really big water gun and drenches everyone. I wasn't there last year, but the year before he came up behind me and drenched me. Before he even halfway emptied his "big guns" I was fighting back. He was laughing at me because I was the only one who shot back, but all I had was a little "pea shooter" Well, Jason, watch out. This year I have THE VINDICATOR!

Of course, you can imagine who got drenched with the water guns (we also got two smaller ones,uh, for back-ups) when we got home. OK, Grace got drenched too. Hmmm, Nick didn't get wet. We'll have to fix that on the next visit! Good thing it was still hot out at night.

Yesterday was also a good day, because look what I got in the mail!

Posted by Nancy Winningham at 6:57 PM

I just bought the Jalie jeans pattern too!

Wow, I hope you like that skirt too. Those are my two favorite pants pattern!

You are a patient soul. Once I saw those 18 pieces I think I would have nixed that idea a moved on to the next. Can't wait to see it when you finish.

Huh?!? 18 pieces and almost 8 yards of fabric? It didn't look that complicated . . . I hope you love it too, it seems like you've already invested some time and love into it.

Water day sounds like fun. Enjoy your revenge! My daughter's class will have water balloons as part of their end of year party tomorrow. I'm going to stay nice and dry inside heat seating all the keepsake t-shirts they will make before going outside.

Having fun with your family--how great is that? Making memories. Nothing wrong with making something complicated. Those are the pieces that stand up to be noticed! I pin my fabric/pattern but use a rotary cutter. I'm much more accurate with the cutter than scissors. Great pants patterns!

I got some new Jalies the other day too - now if i can make time to get anything done I'll be in business.

Good luck with the water guns! lol Your kids are so beautiful, I'm glad you got to spend time together. :-)