Part of my mini wardrobe is the 105 blouse from BWOF April 2009. After seeing Pati Palmer last weekend I decided to try the FFRP method for FBA again and use tissue fitting. I cut a straight 36 from BWOF and tried it on as shown in the book. I found that I needed about 1-3/4 -2" to meet the CF, but the back seemed to be right. I'm doing all the fitting without a "buddy" using just the bathroom mirror and a hand-held mirror. 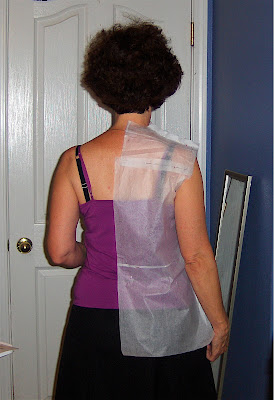 I noticed that the neckline was too low in the back, judging by the location of my necklace on my neck. Pati said that she thought I had a forward neck, so even though I don't have a "high round back", that's the adjustment that would work for this. I did about a 5/8" HRB adjustment and also a forward shoulder just pivoting from the neck to rotate the shoulder seam 1/2" to the front. Now, If I only had to wear a shirt from the collar to the upper third of the armscye I think I would have great fit!! Next, the dreaded bust. I used the FBA as outlined in FFRP and added 1-3/4" in the width. This also widened the whole front, which means I did not have to flare out at the hip. However, I may need to taper in a bit at the waist. There is no dart in this pattern, so I decided to add one. (You need one to do this FBA) This alteration does lower the dart, so after I tried on the tissue fit, I realized that I needed to raise the dart about 1" I'm still not getting the CF on the pattern to match my CF, but I really don't want to make an even larger dart or two darts. I decided to add an addtional 1/2" to the front side seams only by doing pivot and slide. (which is mentioned in the book, does not go into detail)

I think I will still make a muslin because I'm not sure that all of my alterations are right and I'm using art tracing paper which is stiffer than pattern paper which drapes better.

I'm hoping to do the muslin and make the blouse this weekend.

Posted by Nancy Winningham at 9:01 PM

So, what do we think of the tissue fitting method? Maybe I'll try it. But, I'm sure it's easier with a friend.

Congratulations on fitting that pattern! Most people have fitting issues--they just know realize it.

I think it is much easier with softer tissue paper, like the kind they sell. I did it with my pants pattern and it worked well.

Besides, I don't have any friends ;-)

I have to do both FBA and pivot and slide qnd various otehr combinations...but my mottl is - what ever works! When I make a new pattern I always make a muslin. I have learned that lesson the hard way. I find tissue fitting a little frustrating though - I have to see the wrinkles in fabric - must need more practice :)

Oh "the fit." Life would be so much easier if patterns just magically fit us without any adjustments...

It looks like you are doing a good job. It makes sense to add a little to the sides. I usually allow 1" "in-case" seam allowances when in doubt (larger than necessary in case you need the extra!). Also, some fabrics will grow AND the dart may drop--especially rayon. I am thinking you might only need 3/8" HRB alteration, but you can make a note of that for next time. I had fun as the Pattern Review speaker last weekend in Portland. Thanks to all.

Oh look, Pati came to the rescue! Good for you for using your new tissue fitting knowledge. I'm still a little hesitant, it just seems hard to get right if you're doing it alone.

Okay, girl... you have Made Me Brave. I'm gonna try a tissue fit too! Yours ended up absolutely perfect with no muslin. I'm in awe of your backward-looking abilities, and hope I can live up. Um... what's Pati's email address again? ;)
[so cool that she commented on your blog!!]