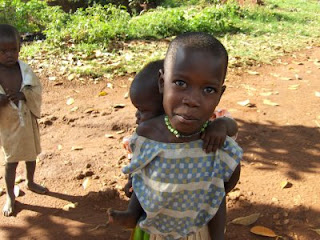 The second week in Uganda was spent mostly in Villages. We traveled through Jinja (more on that later) and then arrived in Kayunga. We stayed at a hotel in Kayunga and drove into smaller villages during the day. The first Village we went to was Busaana. I have seen this village name spelled several different ways on maps and signs, but this is the spelling that was used in the village itself. This little gir stole our hearts and was the first one to greet me in the village. She could not have been more than four or five at the most. She was a tiny little thing, and her job was to carry around this baby on her back. I think the baby weighed about as much as she did. Even with baby in tow, she knelt down on the ground and bowed down to greet us. This was probably the one thing that really surprised me. Later that week, several village women greeted us in the same fashion. (without the baby.) We went to Busaana several different times and I attended church there on that Sunday. Church is pretty much an all day event, but on this day, we took about 20 people down to the Nile in the afternoon for Baptism. Many people came and witnessed this baptism. In Busaana there is a small church and a school behind the church. 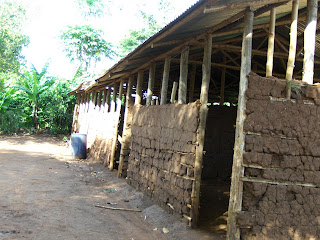 Many of the villages have the school and church connected. In Uganda, all school is paid by the parents. Even in the public schools, parents have to pay. This is the original school building. There are 3 rooms with dirt floors and benches. The walls are brick and are open below the ceiling. 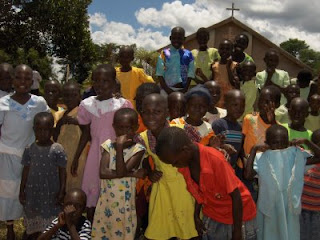 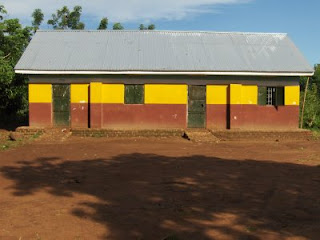 This is the newer building at the school. There were 2 rooms with dirt floors. The wall only goes part way up inbetween the classrooms, so you hear everything going on in the other room. Again, I did not see any books in the schools. We saw lots of whole group response, and choral reading, but no discussions. Students have one break at lunch. 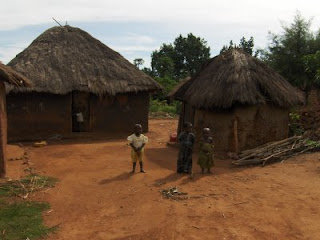 Originally, we were going to do more sewing in Busaana. for some reason, they changed the location to another village named Kasana. Unfortunately, there was no where to sew in the other village, no tables available, and a lack of women who would be able to follow the project from beginning to end. We had to make a decision about what to do at that point and decided to scrap the sewing project for week 2. I'm hoping to go back next year and work on some smaller projects such as skirts that can be completed in one session. I think this will be more appropriate and useful for the women of these communities. Also, I will hope to have treadle machines to use, since these are more readily available in Uganda and the availability of electricity is unpredictable. I have to say I was not really disappointed to scrap the sewing project at that point because I knew that making choir robes was too big of a project and would not be completed since we had only 3 days to be in Busaana and Kasana. This was actually a blessing for all of us, because it freed up some time for us so that on the last Thursday we could go on a safari - which I will write about in another post.
I absolutely loved going into the villages. After spending a week in the slums of Kampala, it was so nice to see beautiful scenery and clean air. Most of the people in the villages did not speak English, but we had translators most of the time. We had an opportunity to go into the village and talk to people in their homes and invite them to an event at the church. Many of the women we saw were outside preparing or cooking food in outdoor "kitchens" 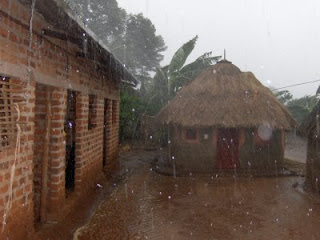 We had a rainstorm come in, and it just burst open on us. One lady invited us into her home and we waited there until the storm passed. Her home was a small (probably 8 foot square) room with one bed and some wooden folding chairs. 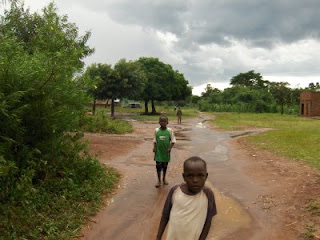 Another woman we met was surrounded by many children. We found out that many of the adults in the village die of HIV or other illnesses, leaving children with no parents. Other adults in the village will feed these children, but no one can afford to clothe them, so often, these are the naked children that you see. Many of the children in the villages and slums of the city have worms and thier bellies stick out very far.
In a way, it was very difficult to go into the villages. It's like spitting into the ocean - the needs are so great and there is so little we can do. One woman asked me if we could take a couple of her children because she just did not have the means to take care of them. It was heartbreaking, and I would just love to take home a handful of children, but things just don't work that simply. there is such a great need for the many many orphahs, yet it is very difficult to adopt a child in Uganda.
Another problem they are having in Uganda is the presence of witchcraft. Although there are numerous Christian churches everywhere, people are going to church on Sunday and the witchdoctor on Monday. There were numerous articles in the papers while we were there about the problems they are having trying to control the incidences of human sacrifice. There is still a lot of work to be done there.
Even though it was discouraging at times to know how little we could do to help these people, it was very humbling to know how grateful they were just to have our presence there. Everyone thanked us profusely just for coming to visit their village, talk with them, and encourage them and their pastors. Most of the people we saw seemed happy most of the time, even though they have such desparate situations.

I loved going out to the villages and meeting the people. The women and children were all curious about us and very generous to share what little they had with us. And of course, everyone wanted to have their picture taken. 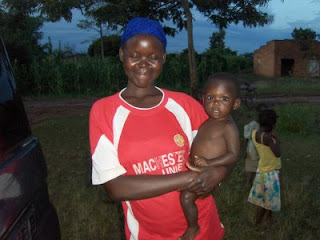 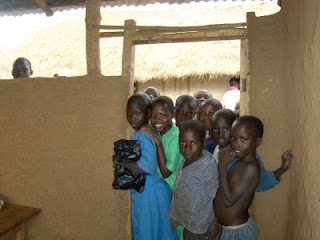 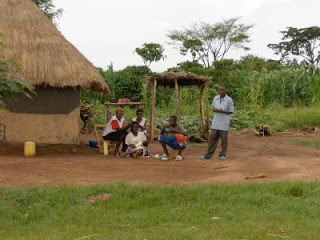 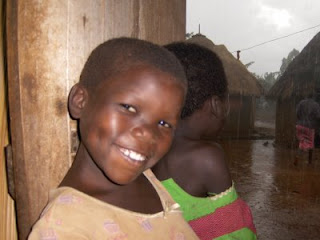 It looks and sounds like you had a wonderful trip! Thanks so much for sharing the pictures and stories about your trip. Glad you are back safely.

Such an experience! It's a once in a lifetime chance to discover another part of the world.

OMG, Nancy! I cannot imagine what my reaction would be to such an experience! Just reading your post made me want to adopt a child. But on the other hand, I'd have a hard time witnessing such living conditions. God bless you and your group for going!

Thank you for sharing :)

This is so great to see from your perspective! Thank you for sharing your adventure with us.

Wow- what an experience! Thank you for sharing.

Thank you for sharing Nancy.
Bless you for your kindness.
I don't know if anyone else noticed how green and lush your pictures are. Maybe it's just because I live in the desert.