A glimpse of Kampala: 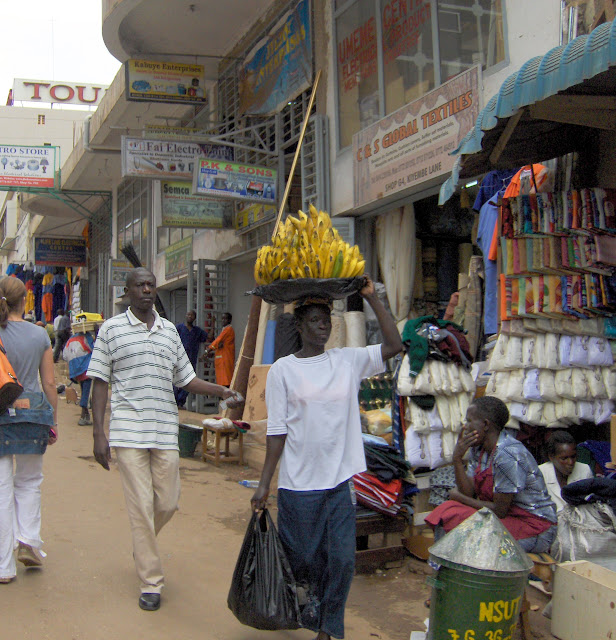 Well, there's nothing I can say that can truly explain how my trip was to Africa. It was, at the least, amazing. The trip was basically divided into two weeks, so today I will tell you a little bit about week 1. (The picture above is in nacacero market, where we went to buy fabric)

After almost 30 hours of travel, we finally landed at Entebbee Airport near Kampala. We finally got to our "home" around midnight on Sunday. Kampala is a large city and we stayed right on the edge of the slums. I did not take any pictures in the slums themselves, because I felt like I would be invading their privacy. There were dirt alley and walkways that wove their way between row after row of small one room cement, brick, or wood buildings. Most only had a curtain and no door. I'm sure thier were no bathrooms in these rooms because the rooms themselves were nothing more than a six to eight foot square. Sometimes as many as 10 people would live in one of these little rooms. The ground was littered with trash, and after the rain, everything is a slippery mudslick. The homes there do not have running water, so everyone uses Gerry-cans to go to the pump or spigot to get water. In the slums there are people and goats everywhere - at all hours of the day or night. The home I stayed in was right on the edge of the slums, and we did having running water and an indoor toilet. There was no hot water heater though. We were living large compared to the other homes around. Just above the slums there were other homes similar to the one I stayed in. 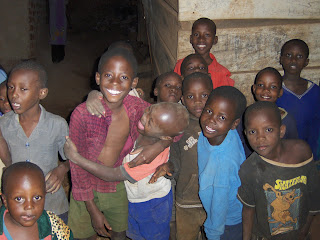 There were lots of children everywhere, and they loved to have their picture taken. Everywhere we went, they would yell out "Mzungu! Mzungu!" which means "white person" Many of these children have never seen white people, so they stared at us wherever we went. 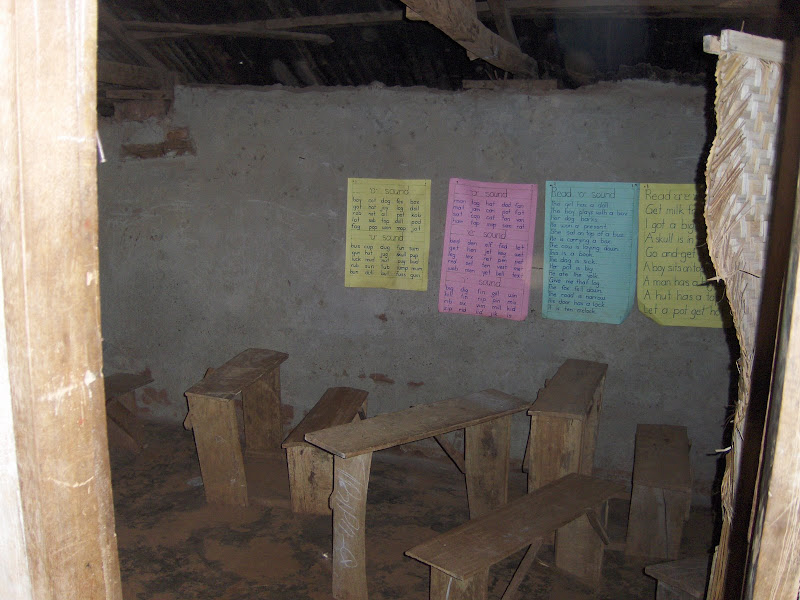 I did not take any pictures of the living quarters, but to give you an idea, here is the inside of one of the school rooms at a private school near where we stayed.

This is a picture of the path to the "hotel" where the rest of our team stayed. The hotel itself was fine, but the surroundings left a lot to be desired. It was good to stay here and see what it was really like. The missionary family that we stayed with has 3 kids and they do go to school there. The school they go to is larger than the one pictured above and a little nicer. However, in all the schools we visited, none of the schools had any books of any kind. Students have something like composition books, and the teacher writes the lessons on the board and the students copy everything down. School is from 7 am until 5pm. Children start school at age 3 and enter "baby class" After baby class they go to "top class". These two classes only go until noon - still, a 5 hour day with no recesses. 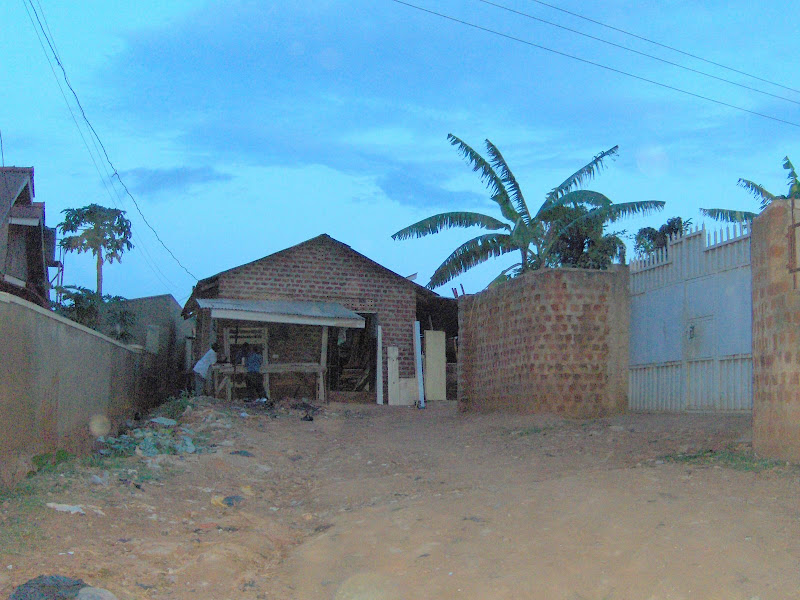 The first day there we got started on making robes right away. About 5 or 6 ladies showed up and we started cutting everything out. they all left at lunch time and I had no idea if they would come back or not. But sure enough, after lunch, they all returned ready to work. Each day was like this with seemingly a different group of women each day. There were a few that were consistent from beginning to end and it was great to get to know a little about them. A couple of the women taught me how to use the treadle machine. We had many machine problems and ended up buying another machine halfway through the week. 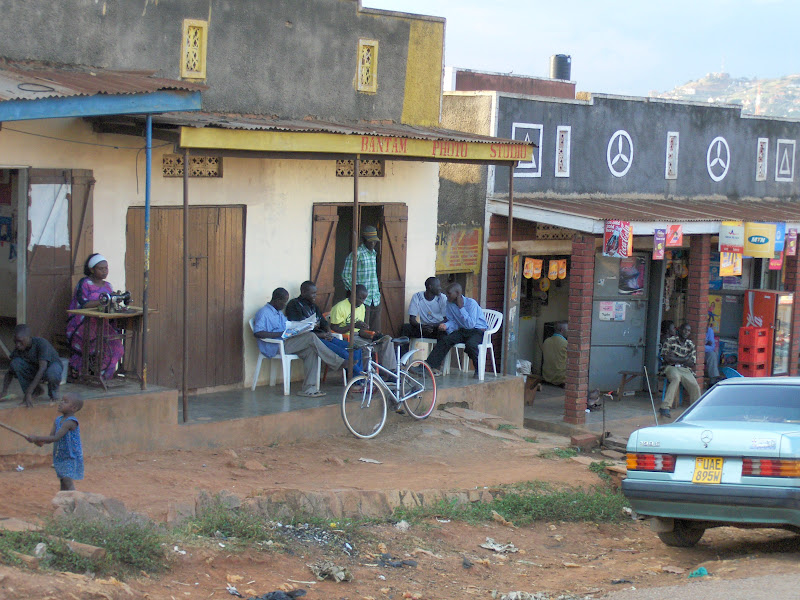 You can see a woman with a sewing machine in this picture. I believe this is the same woman that came over and helped us get the treadle to work in the first place.

By the end of the week, only one robe was finished, but many were almost finished and a few of the ladies will be coming back to the home to work on them in the weeks to come. Hopefully, Loring (the resident missionary) will also be able to start a womens bible study with these ladies. I am praying for this to happen. 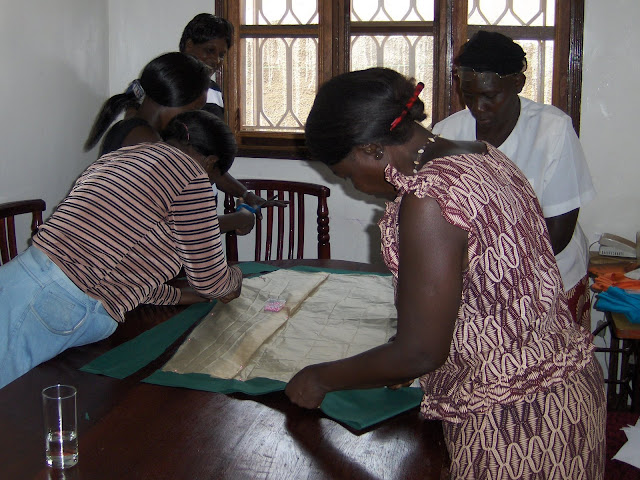 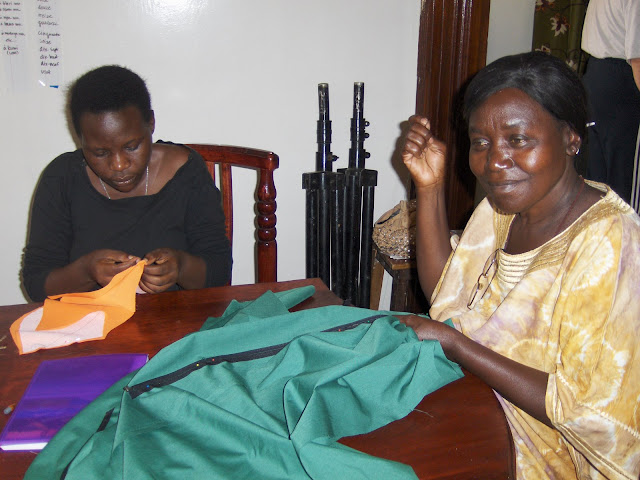 Here is Precilla in her finished robe. 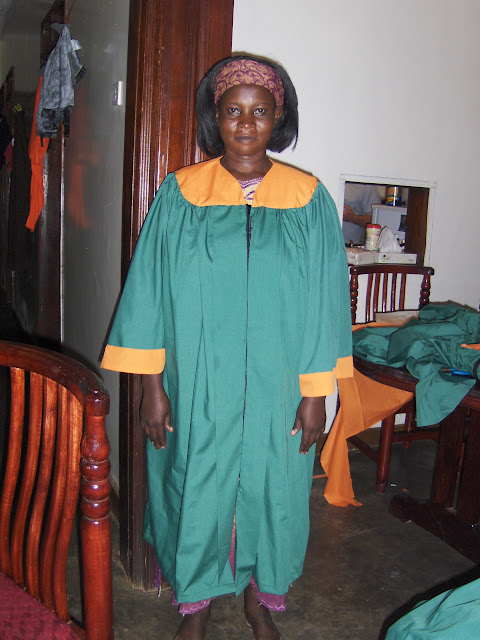 Posted by Nancy Winningham at 10:01 AM

Welcome home! I was just thinking about you this morning. You experience sounds amazing - a wonderful opportunity to learn and serve.

Welcome home. Sounds like a incredible trip. Thanks for sharing, I bet you are tired after all those hours of traveling.

Welcome back! I was thinking about you today, too, wondering when you'd be back and how the sewing went.

Welcome back. What a impression this trip made. We forget how good we've got it sometimes. Thanks for the reminder.

Welcome back. I am relishing these pictures and your story.

Welcome back and thanks for sharing these pictures and story.

Wow, Nancy, what an adventure... Fantastic pictures and writing. I'm glad you're home safe, have been thinking about you. Get some rest, I'll be ready for week two when you are :))
Bet Andy's happy yo have you back;)

So glad you had a safe trip. I bet it was rewarding to you.

What an experience! It must be good to be home too.

Welcome back! What an amazing experience. I'm so glad you are back safely.

I wish my children could see what you have seen....maybe they would think twice before complaining about how 'poor' we are.

Welcome home Nancy....let me know when you want to get together for lunch and a long chat about your adventure.

Oh, it is so wonderful to see what you've done! I can't tell you what a blessing it is. Can't wait for the next installment. :)

I am glad you are back home. It sounds like you had a great experience

Welcome home! What a wonderful adventure!