About a month ago a made a muslin for Simplicity 2697, but didn't get any farther with it.  I tried it on again this weekend and made a few more tweaks to it.  This blouse is put together differently than I would have thought, so in that respect, it is somewhat of a challenge.  I was really drawn to the full sleeves, so I am making the collared neckline with the full,   unbanded sleeves. 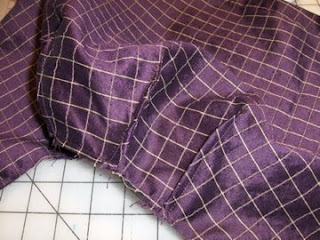 The pattern has a series of darts across the hemline and the directions have you cut triangles in the center of the darts. The fabric I'm using is a poly/silk blend and it really ravels (I don't know what's up with the ravelly fabric lately) Anyway, I am using french seams on the blouse and did not want to leave raw edges on the sleeves. I had read once about making darts like a french seam and actually tried it on a blouse once, although I don't remember which one. So, I decided to do the darts on this sleeve in the same way. It takes twice as long, since you sew each dart twice, but it gives a nice finish 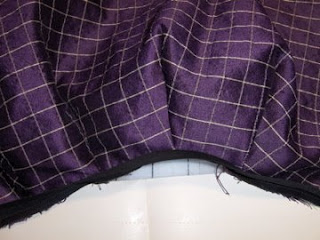 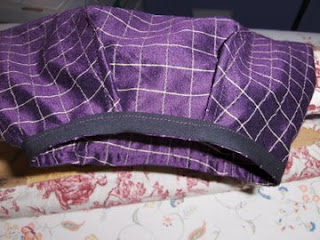 I think this will be a cute blouse when it is finished, but I think it will take me a couple of more days of sewing to finish it.

Posted by Nancy Winningham at 3:21 PM

This is a cute pattern and on top of the pile in my sewing room. I'm looking forward to your review. Those are the sleeves I would use too.

This is very pretty fabric. I seem to be liking all things purple at the moment :)

Thanks Mary, I corrected that.

What a cute blouse pattern! I love the sleeves and teh neckline. That fabric will look pretty.