Then you know it is! In my quest to find a new sewing machine, I decided to look on ebay. Yesterday I saw a Bernina Artista 730E for auction. I emailed the seller and he said he had a buy it now price of $700.00. This just seemed too good to be true. I emailed him some questions, and he responded to most of them. I went back to re-read the auction and it had disappeared. I emailed the seller and asked for the eBay ID and auction number and he never would give me that information. I checked on eBay to read up on spotting fraud. This guy fit every part. He wanted to complete the transaction outside of ebay. He wanted the money wired and would not accept pay pal. He sent me an invoice that said it was from eBay, but it was not. ALWAYS check your "my messages" on ebay before ever responding to anything that says it comes from eBay. If it's not in my messages, it didn't come from e bay. Well, I was so sad. How I would love to own a Bernina Artista 730! Had he been asking several thousand dollars I probably would not have been as suspicious. But $700??? I'm sure the machine costs closer to 10,000. Yes, I would love to have one, but I cannot spend that kind of money on a machine

I have really been having trouble deciding between the Bernina that I can afford and the Baby lock Esante. They each have their pros and cons. If I could afford a higher level Bernina, I would get that. But, the Esante gives you more "goodies" for your money. I'm sure I will be happy with either machine

Now, the good news. I did find a legitimate auction for this. 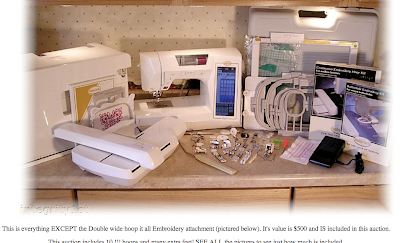 The Ellageo is the step above the Esante. It used to be the top of the line Baby Lock until they came out with the Ellegante. This machine is 3 years old, and supposedly in excellent condition. It has lots of extras - extra hoops, feet, accessories -total value advertised at $7000+ I won the bid at 2600. This is about 600 less than I would have paid for the Bernina Aurora that I was looking at. I'm sure I would love the Bernina, and someday I will have one. But for now, I think this will be the best bet for my money. I know there are advantages for buying from a local dealer. I have only been impressed by the Bernina local dealer, but only the last time I went there. Not the several times I went before. So, I suppose I can offer to pay for a lesson or two on the new machine at our BL dealer if I need one.

Posted by Nancy Winningham at 7:24 PM

Nancy,
Aren't you sooooo excited?....I am!
It is such a thrill to get a new machine.
You will have fun getting to know and enjoy another aspect of being creative with its embroidery and deco stitches....plus its intergration with the computer.
When are you expecting it to arrive?
Have fun!
Enid

I'm hoping to get it this week, but I'm not sure. I have not gotten shipping confirmation yet since I just won the bid this evening. The only downside, since this is a 3year old machine is that it does not have USB integration. My computer does not have a floppy drive, but I have an older one that does. It does not have a monitor. So I guess I will have to look and see which will be the better way to go - some kind of converter box, or a monitor that will work with my old computer. Also, I think I need some kind of converter box to be able to read designs off the internet. I think they cost close to $500.00

I'll bet this makes having to teach summer school worth it. Can't wait to see what you'll do with this monster!

I can't wait to see what you do with it. I never cared for one until I saw what Debbie Cook was doing on her capris. You're going to have so much fun. And good for you for catching a thief.

How exciting! Can't wait to see what you do with it.

Congrats on the new machine.
I was gone the whole time you were asking and getting opinions on PR, but I know you got a good machine, and will enjoy it.
Couple of things to add: Take the classes from your local BL dealer, even if you have to pay for them.
I taught (garment sewing) at a store here that sold both BL and Bernina. The consensus there from all the employees was: if you're garment sewing buy the Bernina, if embroidery is your priority, buy the BL, and have a Bernina on the side for sewing - which means you can get by with much less Bernina than the TOL.
The BabyLock is much more user-friendly for embroidery. My v good friend here has a Bernina 170 to sew on and the Ellageo for embroidery and frequently has both running.
I've taken training at Tacony (the national distributor for BabyLock) and I know that you will get sooo much more out of your machine if you take the classes.
Also, the buttonholes on the ellageo are superb! You will adore them.
I have a Bernina that is embroidery capable, but I have to tell you, it is such a hassle to set up the embroidery and to try to get any design, unless it is an Artista format card, that I don't use it.
If I had the funds, I'd be getting an Ellageo or Ellegante for embroidery.
Have fun with it!

What a great machine! Have fun with it.

Great you decided on a machine. Have lots of fun with it and keep on making those great clothes (with embroidery embellishments, for sure).

ps. I was NOT impressed by our local Bernina guy Nancy, the last time I had a problem with my machine they didn't do a good job fixing it (I think it took 3 attempts and then they tried to charge me extra) but that was over a year ago (and you know how seldom I use my machine).

I tested the Ellageo and Ellegante at a local BL dealer. Mmmmmm...it sewed like smooth butter. Really, it is a nice machine. One day, I will own one as well.

Congrats and have fun for me too!

Wow, that is scary about the eBay auction. I had a similar thing happen a month ago on a Pfaff Creative Vision on eBay. I did send them a copy of the email and they said it was a "spoof"...he wanted me to wire Western Union to the UK.
I ended up with a Baby Lock Ellegante (demo) from the local Baby Lock dealer.
I hope that you enjoy your machine. :-)