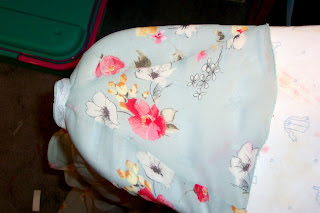 Well, the Barcelona Dress was quite an adventure. The first part was cutting the fabric. Last summer I had received some sheer rayons from a FMF bundle and had ordeed the Barcelona pattern specifically to make of this fabric. Since it was so Spring-like, it got put on the back burner until now. The fabric wasn't difficult to sew, but it was a pain to cut. I couldn't get the grain straight and therefore I think my pattern pieces were off. Fortunately this is a very forgiving pattern, so it worked out. The problem was, when it was finished, it looked very dumpy on me and all of the fullness was at the sides. Thanks to all my friends at PatternREview, I realized I had sewn the skirt on wrong! It only has two seams, and they are front and back, not side seams! This made a huge difference. The first pix shows before I fixed the skirt, and the second one after I removed it and put it on correctly!
The other problem was the sheerness of the fabric made it look very washed out on me. Wearing a white slip underneath helped quite a bit, but it still looked blah. I added lace to the neckline but I don't really like the lace I had. I should rip it off and put something else on - maybe someday.
The other thing that was not flattering on me was the cut of the sleeves. I ended up cutting off the shoulderseam (didn't want to rip out all of that serging on this thin fabric) and adding a triangular shaped godet. This worked great in giivng the sleeve more fulless and not making the shoulders look so droopy.
I doubt I'll ever make this again, but I do really like the drape of the skirt- now that I've done it correctly!

Posted by Nancy Winningham at 11:28 AM