It's Sunday, and my vacation is over :-(. I didn't get nearly the sewing done that I would have liked to, but I did finally get myself to work on a pants muslin yesterday and get the fit right. I am making the pants from FSG 1961. The picture doesn't show them well, but I think I'm really going to like this pattern.
Here are the features:

I checked the measurements of a pair of pants I already have, and decided to cut a 10, but leave 1" seam allowances. I'm glad I did, because after all my fitting, my pattern now lines up exactly with the 14. No change in rise, crotch length, curve of hip. A 14 will fit me perfectly with no alterations other than 1" off the bottom hem! Now of course, I made the muslin of, well, um muslin, and my fabric does have a little stretch, so I may end up taking in the waist a bit. I'm making them black, so I know they won't photograph well, but I have another pair planned in a lighter color as well.

I would be sewing right now, but I'm too sad today. Dear old Dad is just not doing that well. He is finally at the point where he is now on morphine round the clock and we have taken him off of his other medications. He is not eating much and spending most of his time in bed. Today when I went to visit him, he could barely speak and just really didn't want to wake up. We've known this time was coming, and in fact, expected it to be much sooner. I'm so glad I have had these past several months to really spend a lot of good quality time with my dad. This whole thing has actually caused my brothers and me to become much closer, and I am so thankful for that as well. So many families disagree and argue at times like these, and I feel like we have just grown closer and stronger. It's really painful to see a loved one go downhill physically and mentally to the point of needing assistance with everything they do. I did get a good picture of him yesterday though. 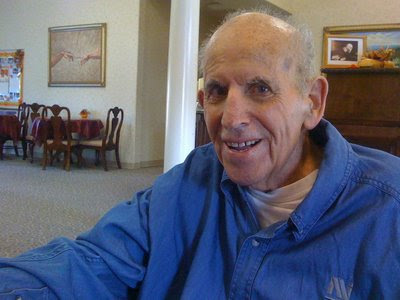 A couple of people have commented about the fabric in my new background. Well, some of you may remember my poltergeist post a few months back. I had two pieces of this fabric that I had ordered from Nancy Erickson at FSG. To make a long story short, I had one piece, it wasn't enough, tried to order more, they were sold out, a week or so later, a lady returned a piece and I got it! Then, I lost the original piece and never did make the jacket. Well, this is the missing fabric. I do plan to make a jacket from it this fall using the FSG 1945 pattern. Hopefully, I'll be able to work on my pants this evening.

OH, and another exciting bit of news! A few months ago I was listening to Lori's Sew Forth Now podcast and she was interviewing Sandra Betzina. Sandra mentioned that she just got back from Uganda (I think it was Uganda) where she spends a year each week teaching women to sew. When I heard this, I told my husband, "I want to do that." Well, today I was talking to a friend of mine at church who made a trip to Uganda in the mission field as a nurse. I was telling her this little story and her eyes lit up. She said she knew someone who had sent out such a crew and that he was coming to their house for lunch today. Well, we went over to lunch and I talked to John about this opportunity. Lord willing, I will be going to Uganda this spring for a week to teach women to sew!

Posted by Nancy Winningham at 5:07 PM

I'm so sorry to hear about your dad...been there, done that...so both you and he will be in my prayers!

And that is tooo awesome about getting the chance to go to Uganda and teach sewing!

I'm sorry to hear your Dad is not doing well. That's a great picture of him! Having your family share this burden is a blessing. I will pray for all of you.

Going to Uganda to teach women to sew! That is exciting! Keep us posted on the arrangements.

I'm so sorry about your Dad, and for your sadness. My late mother would say that your guardian angel led you to the nurse who knew about the sewing classes in Uganda.

I'm sorry about your dad, also. I'm glad that you and your brothers are bonding. I will pray for all of you.

I hope you fullfill your goal by getting the oportunity to travel to Uganda.

Thoughts and prayers are with you and your dad. I also went through this last year. And like you I really treasure the time spent with my father and it also brought 4 (out of 5) siblings together.

I'm sure if you get to Uganda it will be an experience you'll never forget and you will empower so many women even though you will initially only touch a few. Those women will go on to teach others. There is an Australian woman who regularly does this in East Timor and one thing she does is ask for people to donate old but still functional mechanical sewing machines as well.

Good luck on your venture.

My heart goes out to you and your family with your Dad's situation. Been there with Mom and it's not a fun place to be.

The pants sound like they are going to be perfect. Yeah for you! And teaching sewing so far away sounds like a fun adventure!

I'm so sorry about your dad. I've done this with my Mom and my fil and this time near the end is so very sad, but you've had some good things come out of it, which is a blessing. My thoughts are with you.
We have a family friend who got back recently from a tour in the Peace Corp in Malawi. She taught them to sew and her big complaint was that all the clothing being donated and sent to Africa has really been a disservice in destroying local industry. Great for she and her fellow peace corp friends who picked up very cheap clothing, but not so good for the locals. Going and teaching a skill is wonderful. Of course the course of shots you'll have to get is pretty mind boggling!

What a great opportunity to teach sewing in Africa!

I am sorry to hear about your Dad. My MIL went through this with both her parents in the past two years - her father just died a few weeks ago - and it was so tough on everyone. You're in my thoughts and prayers.

I'm so sorry to hear about your Dad - I'll be sending good thoughts for your whole family...

Wow - a trip to Uganda to teach sewing sounds incredible! I'm really looking forward to hearing more about it. It sounds like something I'd love to do someday... Good luck! I hope it works out! :)

Please accept my sincere condolences on the lost of your father. The picture you posted shows a man of great spirit and love for life and family. He must have been a very special man.

I hope you will have an opportunity to teach sewing in Uganda. I actually sponsor a little girl in Uganda through Christian Children's Fund. If you do wind up going, I hope you will discuss your visit on your blog!

Great photo of your Dad Nancy....his smile is just as bright as I remember. Sorry to hear he's not going to be here much longer but so glad you have had the opportunity to spend some good time with him.

You are all in our prayers...

Yay!! This is too cool. I can't wait to hear your stories from Uganda. Wow. Am seriously jealous.