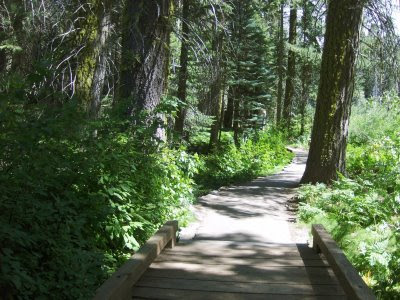 Today I was a tourist in my own backyard. Sequoia National Park is only about an hour from here and our city recently started a shuttle service from Visalia to the Park. For $15, it's well worth it. No worries about parking, gas, driving, or adding to the valley pollution. It was a very fun day. 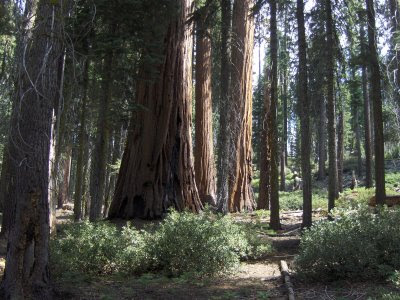 Whenever I go to the mountains, I feel like it recharges my batteries. It's so peaceful and beautiful, that I tried to capture some of it on film so I could share it with you. This picture was taken at Crescent meadow, where there is a mixture of sequoia, pine, fir, and cedar trees, along with a wide variety of brush and ground cover plants.


In the spring, there are wildflowers, but we didn't see many today. I did get one picture of some here 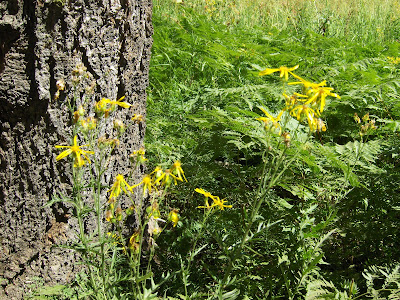 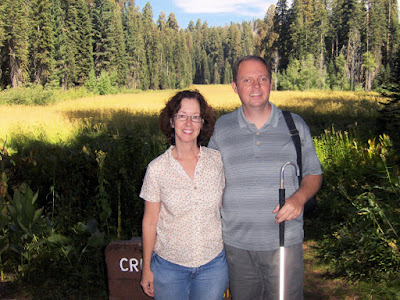 The General Sherman tree is the largest living thing. We chose not to go there today as we have been there many times and it is always very crowded. There are lots of trails nearby, however, that are relatively quiet. But, as I said, we did not go there. We did take a trail around the perimeter of crescent meadow. It was so peaceful and quiet. I could have stayed there for hours. 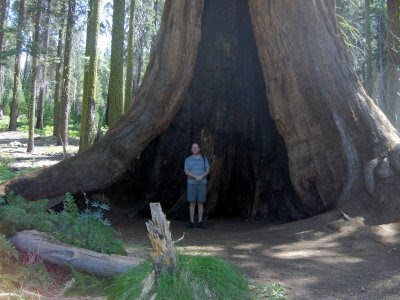 Sequoia trees are pretty much only found here in California, and almost exclusively in this part of the state. There are the largest trees on earth. Did you know that an average sequoia, if laid on the ground in a football field would go from one end to the other? 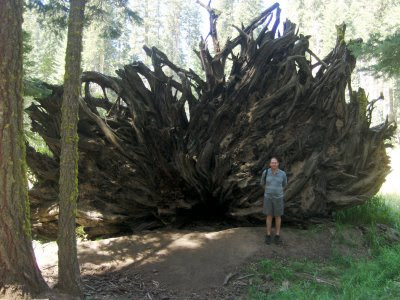 Sequoia trees are highly resistant to fire and insects. Occasionally fire will kill a sequoia, but for the most part, fires help them. For one thing, the heat of the fire causes the seed-bearing cones to open up, and a week or two after the fire, they drop their seeds and new trees sprout. Also, the fire has burned away all the brush that would normally choke out the seedlings, so they have a better chance of taking root. The main thing that kills giant sequoias is the fact that they just fall over. They have a very shallow root system. If they grow too heavy on top, they can just topple over and break into pieces. You do see upturned roots like this all over the park. This is not one of the biggest root systems I've seen, but it gives you an idea. This is only 1/2 of the roots from this tree. 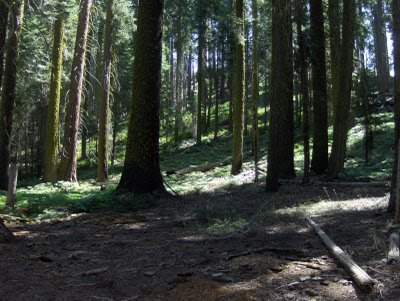 We also visited other places in the part, but stayed in Giant Forest. We had lunch at lodgepole and visited the gift shop there. There is also a museum at the Giant Forest entrance, and we spent some time there as well. But, the highlight of my day was the beauty of Crescent Meadow. Surprisingly enough, I did not see any wildlife today - not even a bird. Usually you can expect to see hawks, eagles, squirrels, and even a bear, fox, or cougar on occasion. The only wildlife I saw today was flies!

Oh, and please, click on these pix to see how beautiful it really is in the park!

Posted by Nancy Winningham at 9:00 PM

The photographs really convey the serenity and beauty of the forest.

Are you serious? I had no idea these trees were really that huge. How lucky you are to be in CA and close to the park.

State parks and National reserves are wonderful! There is a beautiful state park near me and I don't visit it often enough. Thanks for sharing your pictures.

We visited there when I was a child, many moons ago. It was amazing. I would love to take my kids when they are a little older and we could actually survive driving from Texas to California with 4 kids.

I didn't know about the shuttle; we are SO doing this. Great post Nancy, and beautiful pics!!!

Really enjoyed seeing your pics of the park and trees. I love to see what other parts of the country looks like.
Donna W
Edmonton, Alberta