I haven't been doing much sewing lately, so I wanted to do something quick and easy. I had this knit in my stash and decided to make a longer version of view A to make it a dress rather than a tunic. As I told a friend the other day, my legs aren't exactly "tights worthy." This would have been quick and easy, but I always find jersey to be such a pain to work with. It takes forever to lay it out because it is almost impossible to get the grain straight. But, boy, if you don't, you're in for trouble. This time I decided to cut the fabric into smaller pieces to make it easier to work with. First of all, I decided how much length I would need for the front and back, and cut a piece that long. Then, since the fabric needed two folds, I cut the fabric down the middle so I only had a 30"wide piece to work with rather than a 60" piece with two fold. this did make it a lot easier, but then, of course, the selvedge problem reared it's ugly head. This is not the first time that I've prewashed jersey and had the selvedge shrink; therefore, wrinkling the edge of the fabric. So, I cut of the selvedge (for some reason, it only did this on one selvedge and not the other.) This pattern was easy since there was only front, back, sleeve, and neckband.

I added width in the front for FBA, but then ended up taking out an inch on each side seam. I started with a 10 and tapered to a 12 at the hips, but I could have easily cut an 8 and been fine. This pattern had a lot of ease for a knit, even though they recommend jersey. It's really fitted more for a matte jersey, which has less stretch. I also added 6" to the longest length, but ended up cutting off one inch, so I really only added 5" and I took a 1" hem. I also shortened the sleeves a couple of inches. 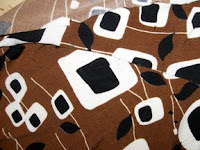 I had one little problem when I was serging on the sleeve. Even though I had basted it on first, the fabric folded underneath the seam and I ended up cutting a piece of the sleeve about 3/4" long. I did not have enough fabric left over to cut a new sleeve, so I made a little patch. Fortunately, this is a busy print and it will go unnoticed. I cut a piece of the print similar to the place I was patching, which kind of was a football shape. I put little pieces of steam a seam around the hole and then fused the other fabric to it. It looks great and you can't even tell it's there. The sleeves were kind of loose, so when I took in the side seam, I raised the armscye by 1" and took the sleeve in 1/2" all the way down.

AND.. I finally got to use my coverstitch machine and did the sleeve and bottom hems with it. I want to make the sleeveless top version of this next. 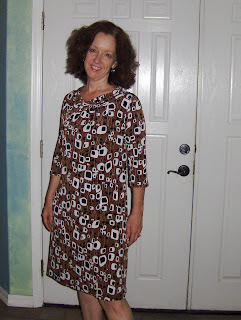 Posted by Nancy Winningham at 10:02 PM

Great dress! I love the neckline, and that brown color flatters your coloring very nicely.

Nice dress. That fabric is lovely.

That's such a great versatile dress! Glad you got to use the coverstitch machine, too.

The dress looks great. I love the print. Thanks for the knit cutting tips. I don't work with knits a lot because they often have a mind of their own when you try to cut them.

Great dress! Thanks for sharing the technical details, such as how you tamed the knit, and the amount of ease in the pattern. The dress looks great on you! I might not have looked twice at this pattern, but I may have to give it a try.

Great dress made from beautiful fabric. I bet you loved using your coverstitch machine.

I love your new dress; that's a great print. And, oh, by the way, I've tagged you. You can read about it here.

Nancy, I love your dress and you look great in it!

What a great dress! Sorry there were some challenges but you ended up with a great result!

Oh, Nancy, that's lovely! I'm looking forward to using my mom's coverstich machine next month- thanks for the tips.

Very cute! Love the fabric and the neckline.