My main goal this summer was to do a lot of sewing.  Well, once again, work is taking over my life even though I'm supposed to be on vacation.  I won't get into it, because I'll be ranting forever!  Let's just say that school's been over for over a week and a half, and today is the first day I've had to do ANY sewing.  Thankfully, I haven't been working every day - hubby and I did take a little time to go shopping for our vacation this summer, and I finally have time to start getting excited about it.  We are going to go on a cruise to Alaska!  Anyway, more about that later.

A good friend of mine has a daughter going to Point Loma this fall.  She asked me to sew a laundry bag for her.  Normally I DO NOT sew for anyone other than family, and rarely for anyone other than myself.  Yeah, I'm selfish that way.  BUT, my friend Betsy is a good friend and she saved my butt one day this week when I was about ready to fall apart.  OK.  I did fall apart.  But she was there in 20 minutes and helped me make it through.  Yay Betsy!!  Also, her daughter is pretty awesome as well.

Well, I've never made a laundry bag, so of course, I had to make a big project out of it.  I'm sure a laundry bag can be made in a lot less than 5 hours, but not in my sewing room ;-)  If I made another one (which I won't) I could probably make it in half that time.  For one thing, I haven't used my embroidery feature in so long, it took a good deal of time just to figure out how to do it. 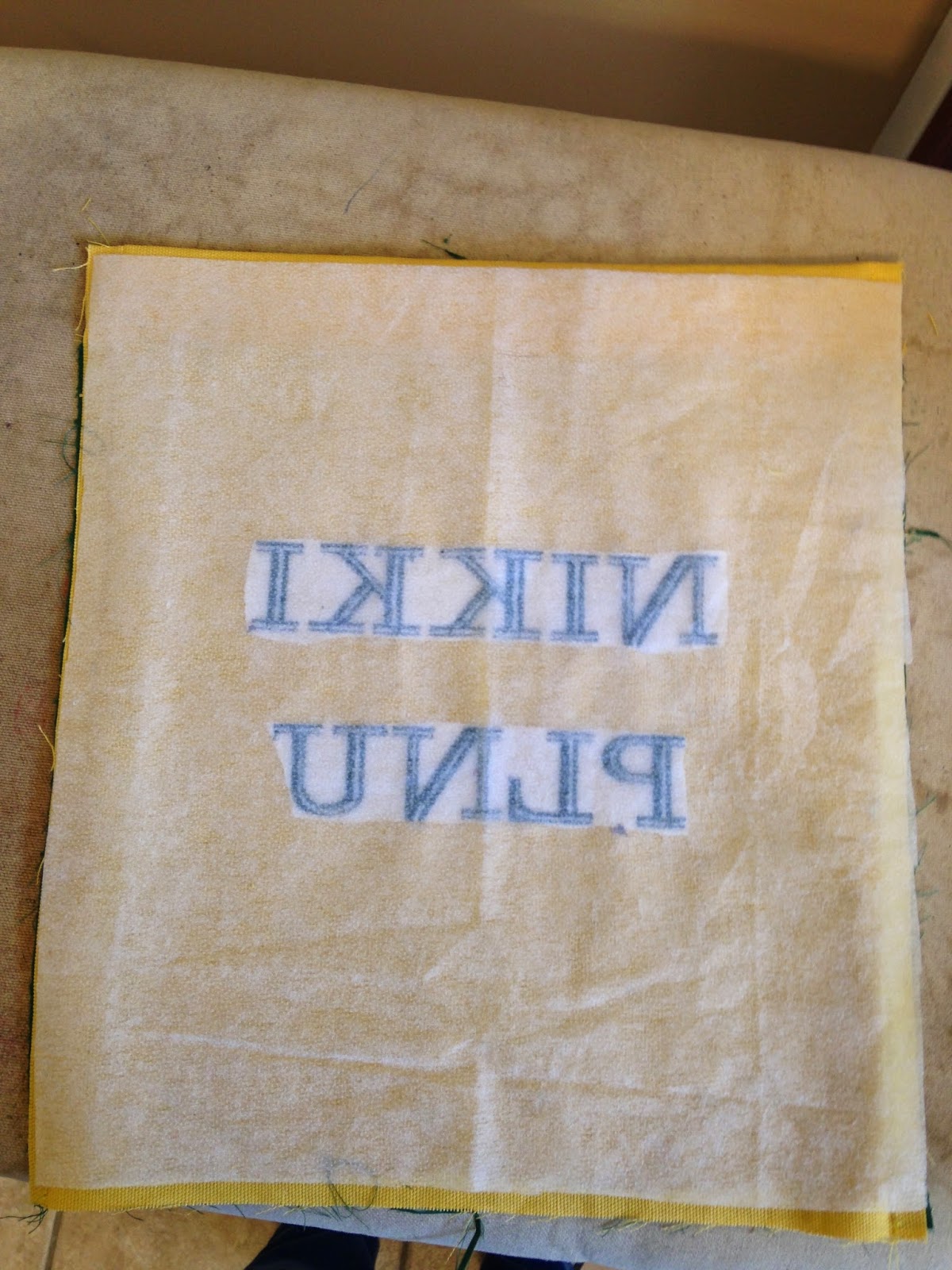 I'm really glad I decided to the embroidery on the pocket instead of the whole bag.  You know, incase either I or the machine messed up.  Which of course, did happen.  I finally got my embroidery going and it turned out really well. 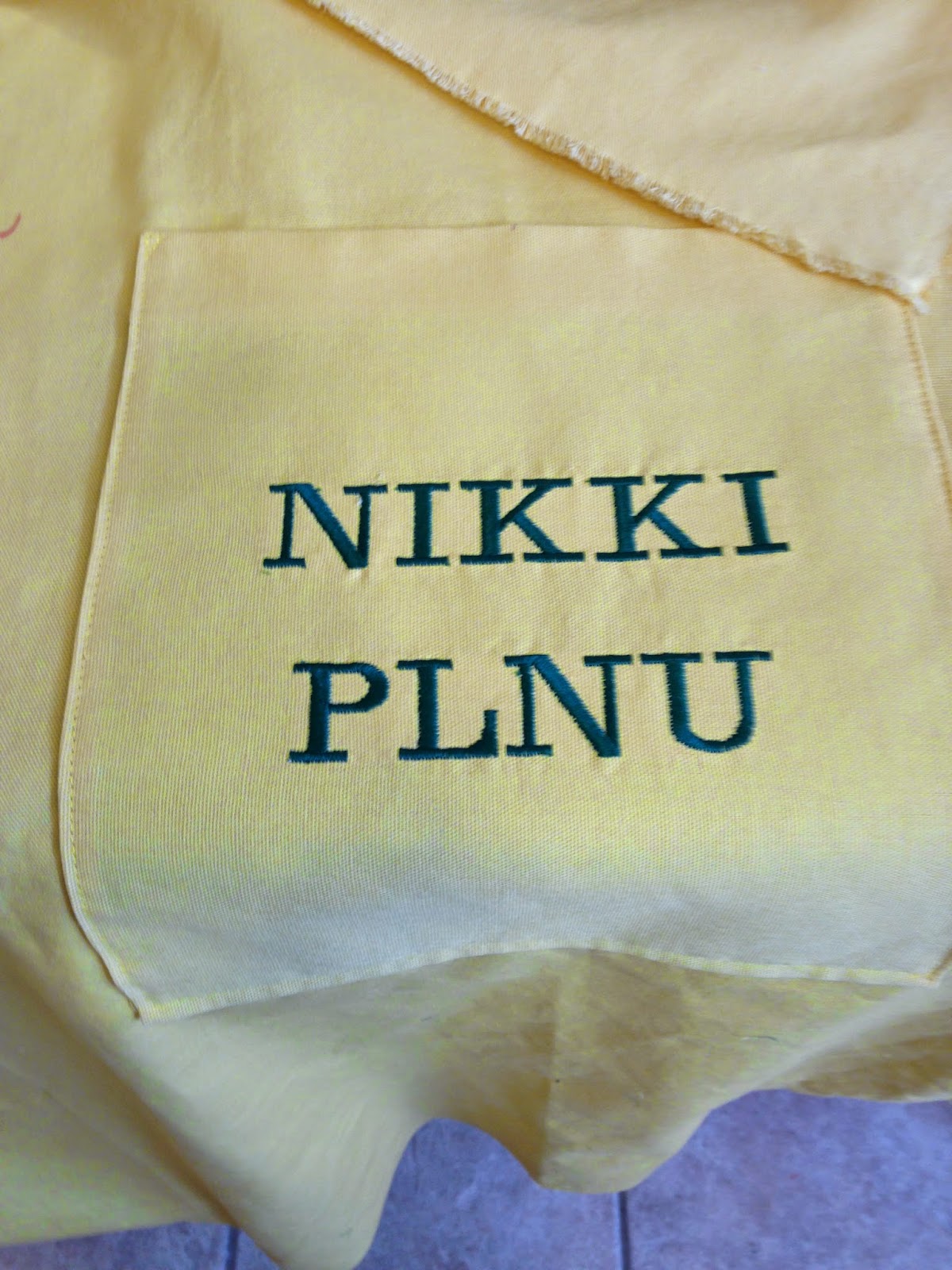 I'm not sure what the fabric is, but it may be duck or some other home dec type fabric.  It's a little looser weave than duck.  Since the fabric is yellow and the lining is dark green, I didn't like the way the green showed through on the pocket.  Of course, I had already made the pocket by the time I had this realization, so I just ironed on some interfacing to the underside of the embroidery.  It did help, but it might have been better if I would have sewn on some white fabric or muslin underneath.

Why I thought it would be a good idea to line this bag is beyond me, but it's done.  Betsy bought the fabric, so I was thinking that she was buying quilting weight fabric, so I told her to get lining.  She does not sew at all, so we had lots of texts and phone conversations while she was in the fabric store and I was 45 minutes away! 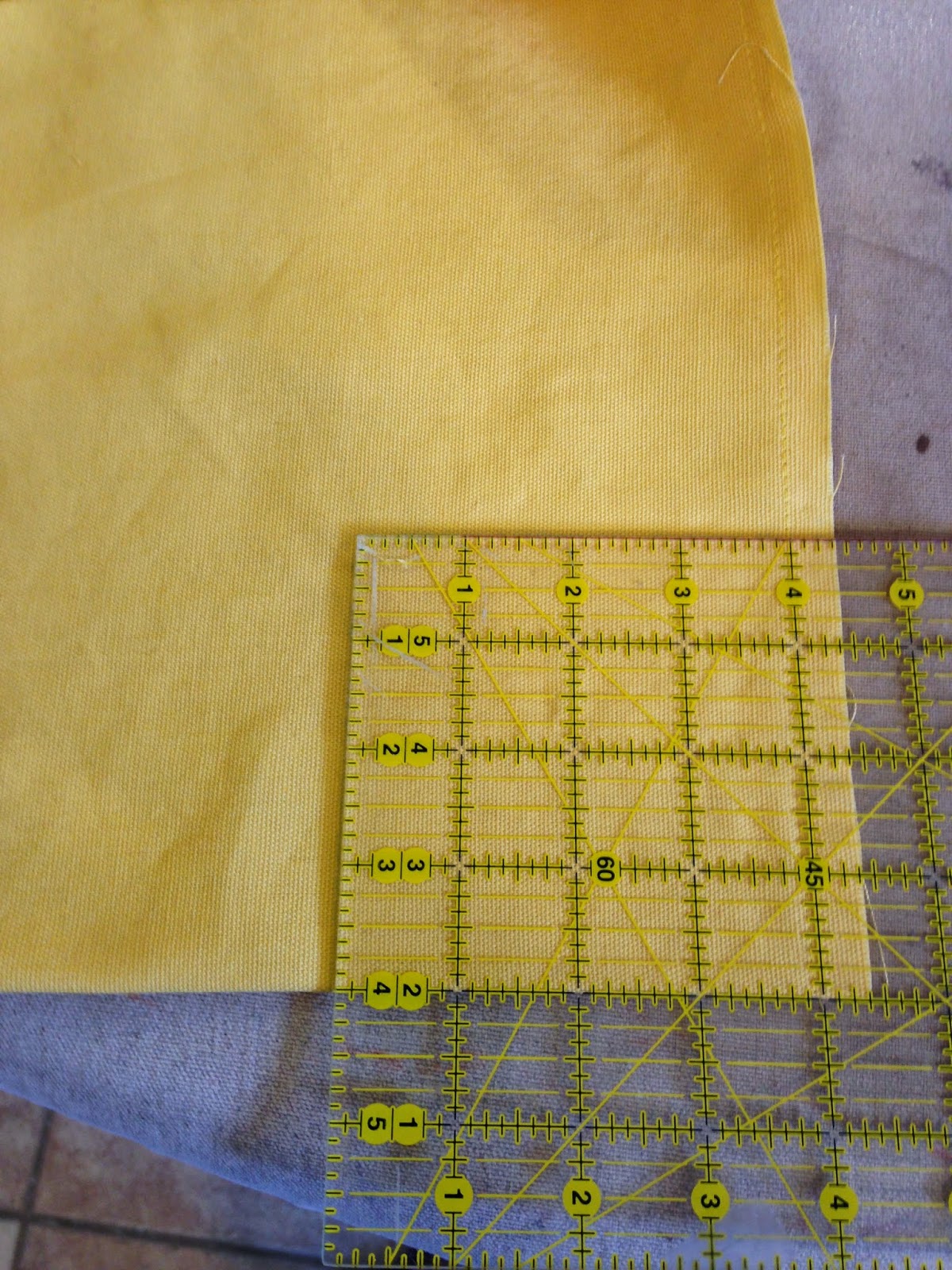 I wanted to make the bottoms a little squared, so I marked off a 4" square in each corner (both sides) and them pulled them out and sewed across to make the box bottom.   Good thing I've made some purses that used this technique before or I probably would not have figured it out! 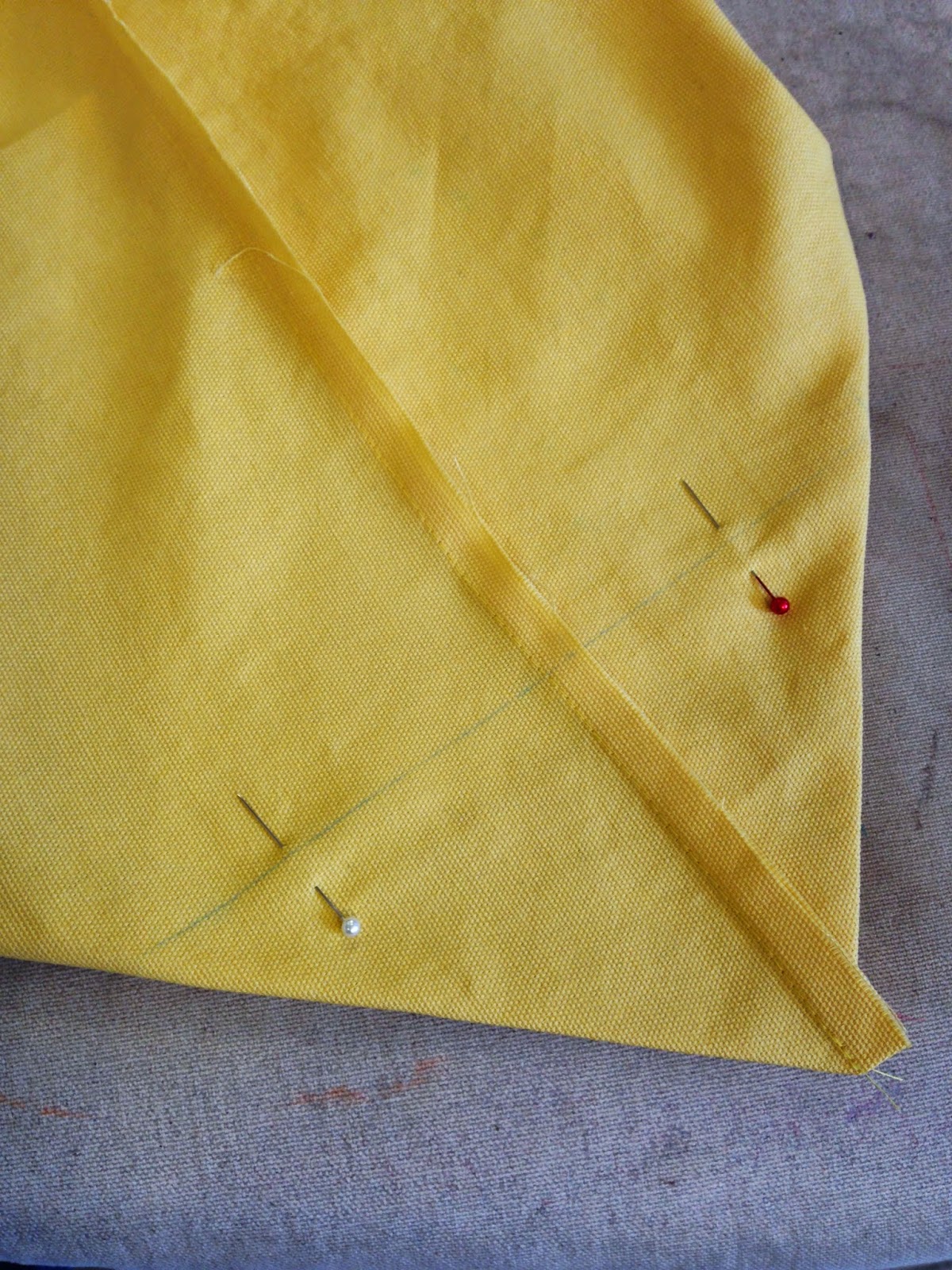 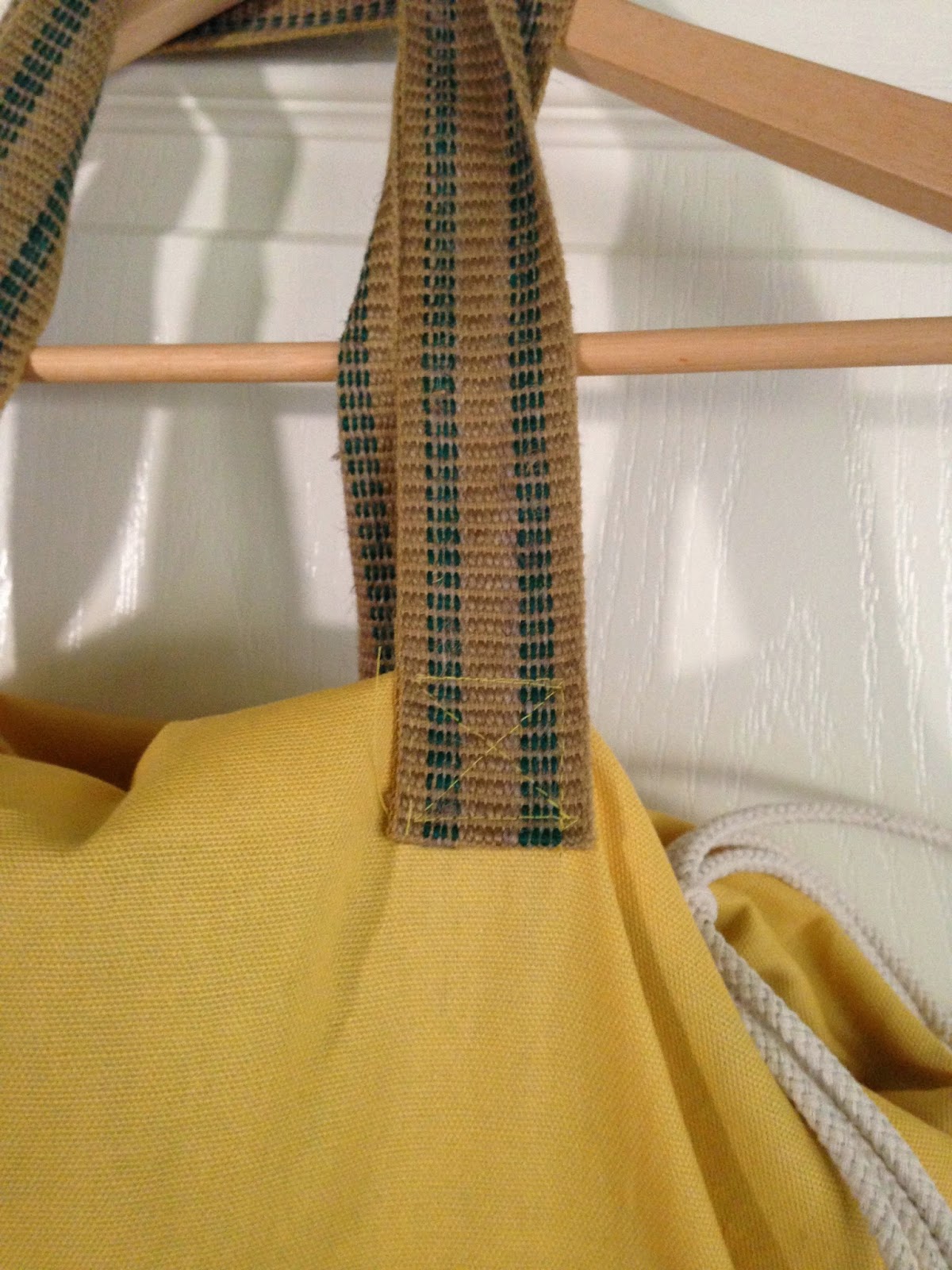 Betsy bought this cool webbing for the handles.  I had a hard time deciding where to place the handles, but I think I got it right.  Also, the bag was way to long, so I cut a couple of inches off the top.  I wish I would have put the pocket a few inches lower, but when I originally marked it, I was thinking of using a 6"square to mark off the box corner.  That was too big and made the bag too narrow.  I would have preferred to make a double drawstring, but I did not have enough cording, so I went with single.  It's 45 minutes for me to get to the fabric store now that we've moved to Three Rivers.  That would be 1.5 hours of sewing time, let alone the time I would have wasted in JoAnns! 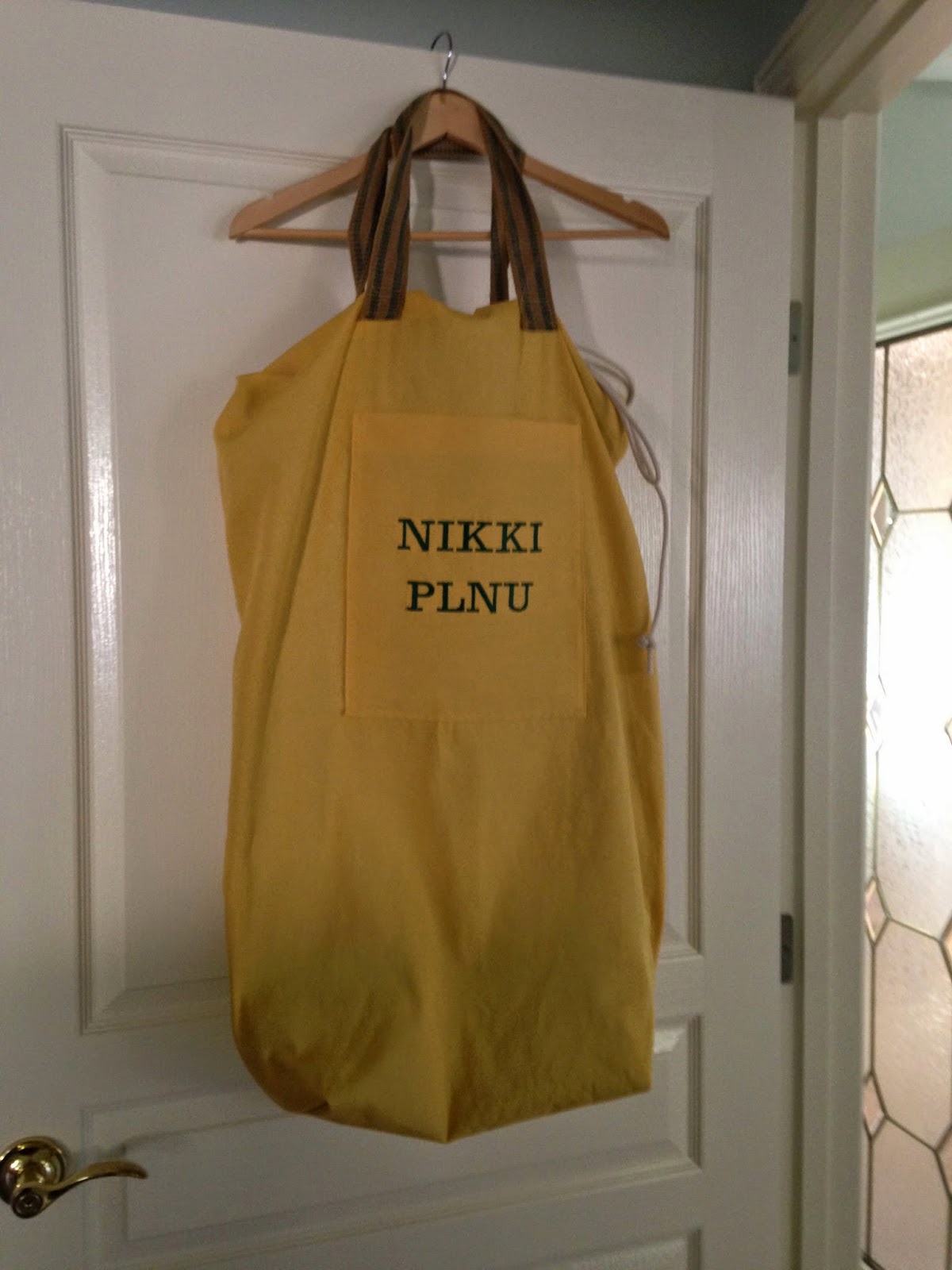 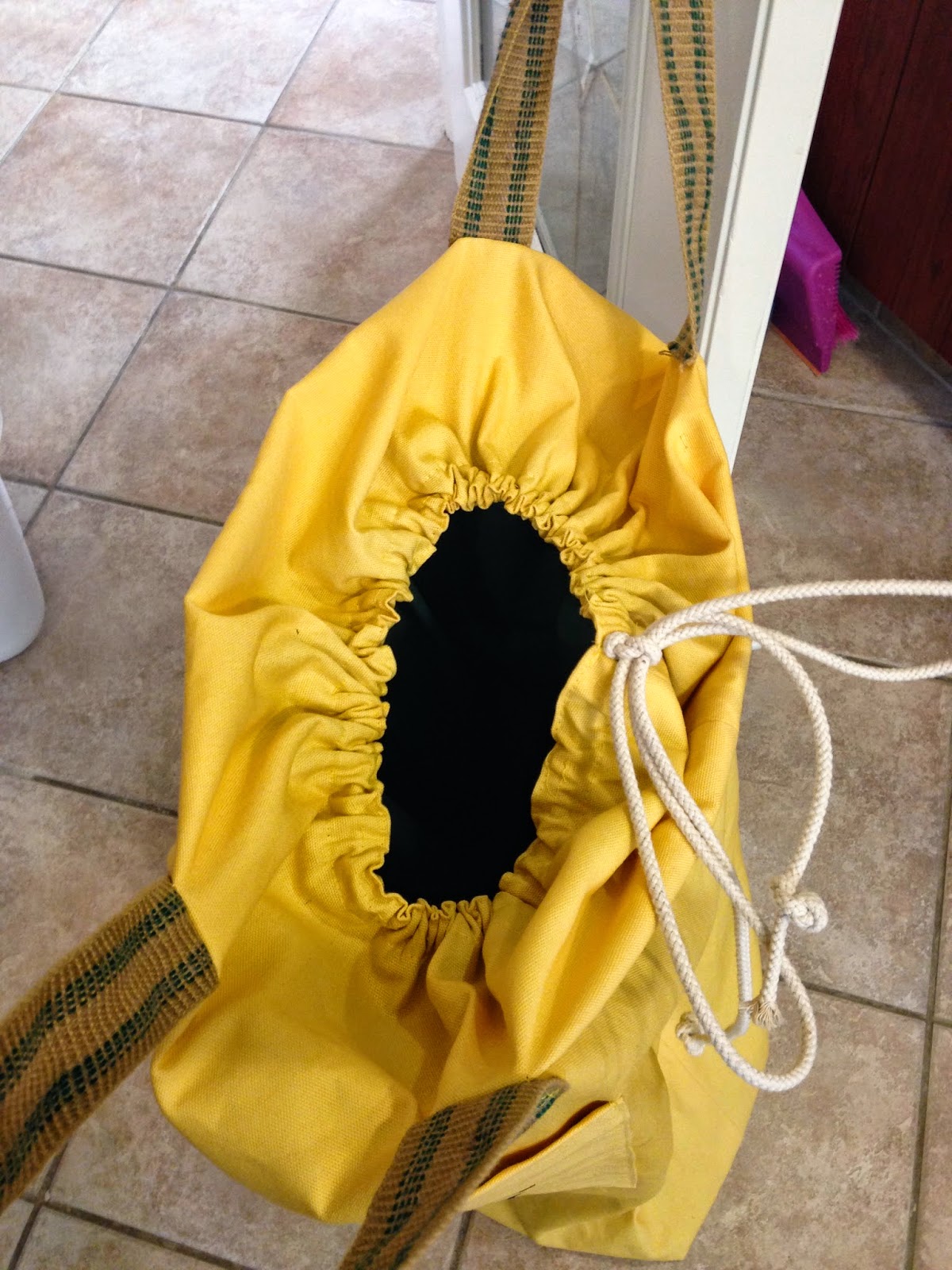 I'm happy with how the bag turned out, but I can't help thinking that I could have made a dress (or at least gotten a good start) in that time!  That's OK though, because I really wanted to do this for my friend.  Good thing Nikki's a strong girl - this bag will hold a ton of laundry!!

Posted by Nancy Winningham at 6:44 PM

Nice bag - and you're a good friend!