Several months ago, I signed up for the Bombshell Dress class at Craftsy.com.  I watched the majority of the videos, read all the information, downloaded the pattern, but didn’t do anything further.  Now that I have a little time, I’ve decided to make the dress.  First, let me say, that even if you never make the dress, the class is worth it just for the wealth of information.  Gretchen Hirsch has a great teaching style and the class is fun to watch.
The Pattern;  The course uses this pattern from Burdastyle. Actually, I like Gretchen's versions much better.  The dress on the model at Burda doesn't even fit her correctly in the bust.  The pattern comes as part of the class, so you do not have to buy it separately.  I printed off this pattern months ago, but have not looked at it since.  Unfortunately, I did not realize until I had the whole thing taped together that the printing is off by about 1/8”!!  I thought about re-printing the pattern and   putting it all together, but it does take some time to do this.  Since I’m going to be making a muslin anyway, I think it won’t be that big of an issue.  You can follow me on this adventure here on my blog. 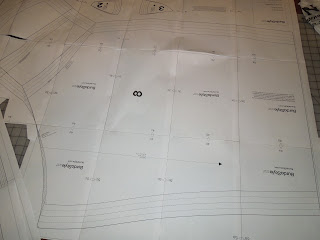 First of all, I always seem to have a bit of trouble with downloadable patterns.  They never seem to line up completely perfectly.  At first I thought it might have been because the scale of this one is off a bit, but I had the same problem when I downloaded the Sewing Workshop e-shrug, and that one was right on scale.
Anyway, I did get the pattern put together and cut apart.  You do not cut the pattern to your size because the whole thing is going to be traced onto muslin. 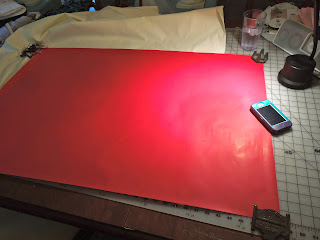 I am also signed up for the Susan Khalji couture dress class (which I also have not started making) and both classes use a lot of the same techniques.  I believe that Gretchen did study under Susan at some point, so that may be why.  Again, both classes are wonderful and well worth the time!  The classes at Craftsy go on sale quite often, so make sure you get on their newsletter if you haven’t done it already.  Anyway, I can’t remember which class recommended the site Richard the Thread  but I believe it is the only place you can get really large sheets of tracing paper.  You have to buy 3 of one color at a time, but it is great stuff.  I used it for the first time today.  It is really dark, and probably won’t wash out, but for using on the muslin it is perfect. 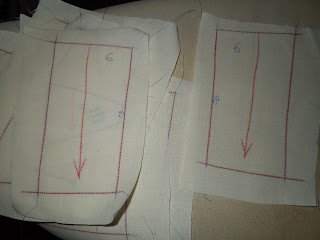 After I traced all of the pattern pieces for the bodice onto muslin, I then “thread traced” them with the sewing machine.  Since I used red tracing paper, I did the stitching in blue so it would be easier to see.  This is as far as I got earlier today since DD and I decided to start re-watching all of the Lost series starting with season one episode one.  They’re starting tonight on TV, but we are watching them with netflix. 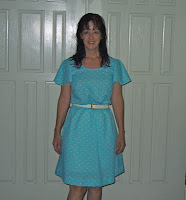 I have done some other sewing lately.  I made a dress out of the NL 6104 pattern, but I’m not that thrilled with it.  I’ll wear it at home, but probably not anywhere else.  It feels kind of frumpy to me.

I also made a cute skirt for my daughter and then one for myself.  I don’t have a picture of mine yet, but will post it later when I get a picture. 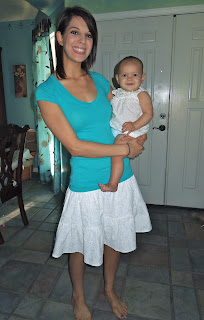 So, have any of you signed up for any of the Craftsy classes?  If so, what projects have you completed?  I’d love to see how the rest of you are doing with them.

Posted by Nancy Winningham at 11:01 PM

I have Kenneth King's Jeanius and Susan Kahlje's Couture dress, but I'm still in the "watching phase". I want to watch them through first and then make the garments. I really like the format! Can't wait to see your finished Bombshell dress!

I have signed up for Khalje's class and love it. I'm working on the dress at the moment. She takes you step by step and gives you all the info you need. It's well worth the cost! I also signed up for K. King's class and watched a few chapters, but haven't actually done the pants. BUT, it is also very informative. I just signed up for the fabric dying class.

I'm a "show me" person and these classes are great!

I am also signed up for the KK class and the Couture Dress. I plan to finish the bombshell, do the couture dress, and then tackle the jenious class. I'm very intrigued with the dying class, but I think I better finish these first!