I had surgery earlier this week and am not supposed to be doing much of anything. I tried sewing a couple of times earlier in the week, but ended up giving up before I could even get anything traced. Well, yesterday, I finished tracing the Sewy Rebecca bra pattern. It has a 3 piece cup and a band. (Most of my RTW bras do NOT have a band)

I bought this pattern last year as I had been inspired by several bras that Sigrid has made. When I got my pattern out about a month ago, I thought I had the wrong size because of the chart on the envelope. As it turns out, I had the right size after all. I was inspired again to make this bra after seeing the beautiful one that Cidell did just recently. It seems like it is taking me forever to put this thing together. First I traced all the pattern pieces, but then realized I probably needed a 75E, but won't really know until it is finished. So, I traced it again.. The pattern does not have SAs, so I added them. Then, I realized that I needed two different sized seam allowances, so I had to change those. Fortunately, I had a great set of instructions in English from Elingeria, where I ordered the pattern. Unfortunately, they no longer carry this pattern.

I am just using basic white, because that is what I have. I have a beautiful colored plum with matching lace, but no bra hook piece in that color. After making this one, I'll know if that will be easy to alter or not.

This is definitely a heavy duty bra because the back pieces are pretty wide. This is what I have done so far: 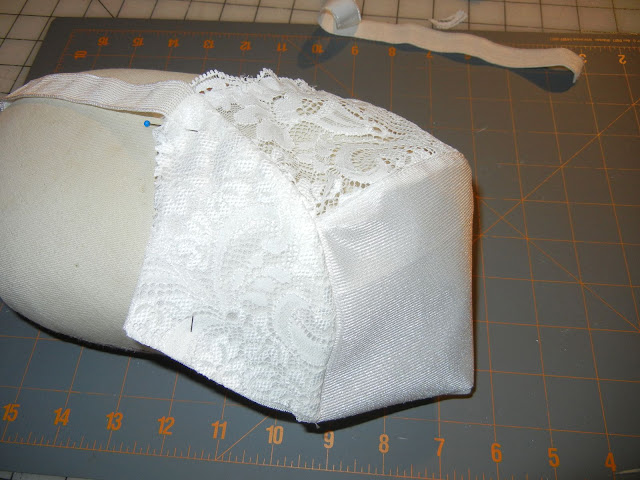 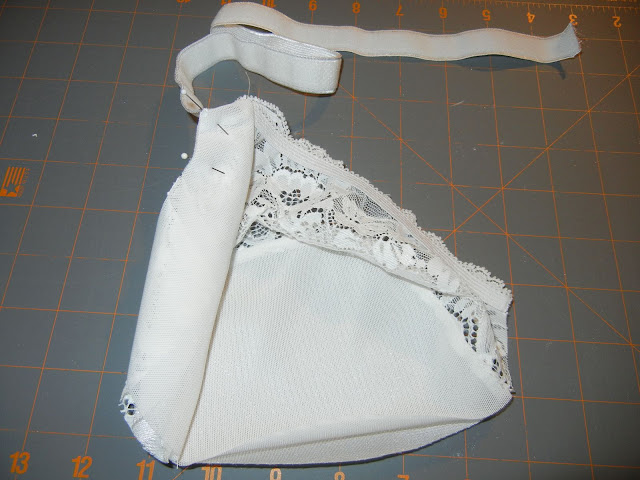 I'll keep you posted on my progress.

I hope you feel better soon as you recover from your surgery! Hurray for bra sewing. I agree the two bloggers you mentioned are very inspiring. You can get the sewy rebecca bra from http://www.sewy.de/ I used google translate and view, then emailed them to send me a paypal invoice. The shipping cost shows up wrong on the website - beware. Your white bra looks very pretty indeed - I just discovered yesterday that I have only ONE white bra and truly must buy or sew some soon. RTW is tough, since I wear 36 F, FF or G or H, depending on brand and style. I have several patterns, including the Rebecca, bramakers.com Pinup girls classic and Linda patterns, Needlenook Fabrics Bravo Bella pattern, as well as some Freya RTW I intend to clone "someday" when I get a round tuit. Kudos to you for bra sewing - it is intimidating to many, but very rewarding once the pattern has been perfected.

Oh my! Best wishes to you. Hope you feeling better each day and recover quickly.

I love your creation. Do you have any idea where I can purchase the rebecca bra pattern?
Michele P
http://sewinspirations.blogspot.com/

Would you be willing to share the English instructions you have for the Rebecca pattern?

Do you have the English instructions for the Rebecca bra? Would you share them?

Michelle, I do - I just have to look for them. Email me at nwinning at gmail dot com