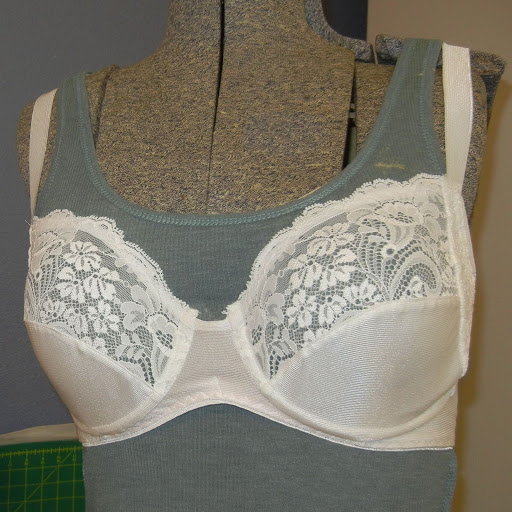 Well, after many hours, and lots of ripping out seams and discovering mistakes, it is finished. I made a big mistake with the elastic, which, in turn, caused me to have to cut the back band shorter. So, it is a little tight in the band, but not too tight to wear. (unless I gain back the 5 lbs I've lost lately!)
This bra is basically a muslin, so I just used what I had on hand. It is wearable though, so that is good.

Here is a partial of my review at PR:

This bra took me 2 days to put together. The next one should go together much faster. I now realize that I prefer non-elastic straps, so next time I will make them out of fabric. Also, this pattern has a fairly wide back, which I did not think I would like. Even though I made a mistake that made my band smaller than it should be (in circumference), I still think this wider back really helps eliminate “fat back” and looks nice under a top.
back view

Fabric Used: the pattern calls for lingerie lycra for cups and sides. I did not have findings that matched any of my lycra, so I used tricot instead. The lower and side cups, as well as the sides and back are all lined with powermesh, so you really can use any kind of knit you want.

Pattern Alterations or any design changes you made: For this one, I made a straight 75E. I’m going to try the F next time to see how they compare. I did not make any intentional design changes, but I did run into a few problems that created unintentional changes.

Conclusion There are several things that I need to change or mistakes that I made. I will let you know what they are so you can avoid the same mistakes.

Since it is very difficult for me to find my bra size in RTW, and when I do I’m usually looking at $75.00 up, I’m definitely going to try to perfect this pattern. I do like the shape of the cups better than the result I got from KwikSew 3300, however, I think the construction on the KS pattern was much easier and gave just as nice a result.

There is still some wrinkling under the cups that I'd like to correct, but I still think I need to go to the bigger size in order for it to fit better in the CF. Also, I'm hoping the larger size will bring the lower cup up more

Posted by Nancy Winningham at 12:50 PM