If you have not been watching the webcasts by Peggy Sager, you are really missing out. I hadn't been interested because I thought the patterns looked dated, but somehow I stumbled across the pants fitting one and was VERY impressed. She also explains how to get the look you want (style) from the basic pattern once you get the fit right. So don't be fooled by the envelope pictures! You can see past webcasts (and there are a lot - and they're free!) at silhouettepatterns.com. Scroll down and click on the link for webcasts. I am trying to follow her method as I make this muslin.

I am using the Sally pant as my base pattern. Now, I would never have chosen this style based on the envelope picture, but this is her basic fit pattern, so I decided to start with that. Also, she makes 2 different versions of this in the webcast, and they both look very different. Peggy Sager uses finished measurements for her patterns - not body measurements. You take your hip measurement then sit down. It will spread a couple (or a few) inches. This is the measurement you use to determine your size.

I then took a pair of my favorite fitting pants and measured the circumference at the thigh (at the crotch), the knee, and the hem. I also measured the crotch to knee and the inseam and wrote all these measurements down. I then compared them to the pattern. This pattern has a very narrow width at the hem, but at the above ankle length, which is how I want to make them, they were the same as my pants. All of the measurements for the size 14 lined up with my pants, so that is the size I will start with. 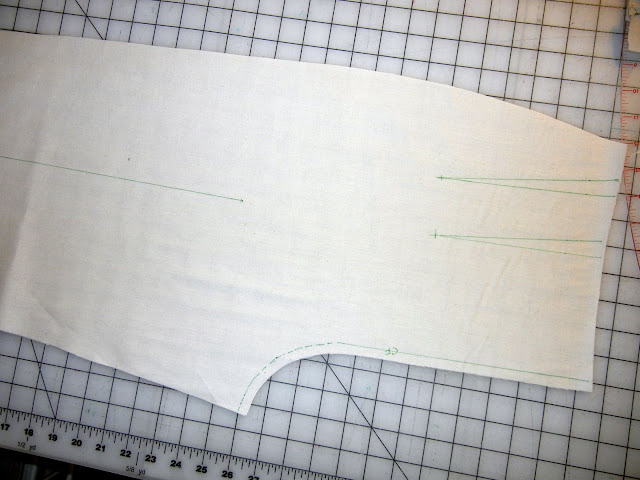 First, cut out the pattern in muslin and mark the grain line, darts, center front and back. Silhouette patterns use 3/8" seam allowances, so I marked this with pen just on the CF. Oh, I usually have to raise the waist on pants because of a low, flat butt, so I added 1" to the top. Sine the pattern is designed for someone 5'8" tall, most people would not have to do that. I am only 5'6, but I added it to be safe. It is a muslin, so I will cut it off if it is not needed. 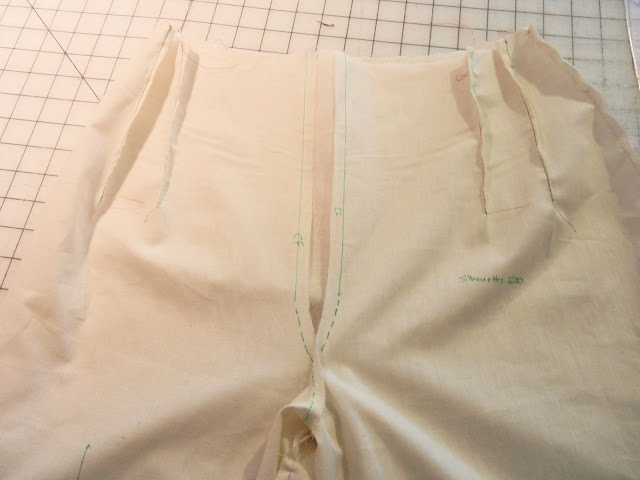 Next, sew the darts in front and back. Then sew the rest of the pants together except for the CF seam. I sewed about 3 inches past the crotch point.

End of session one! (Actually, I had a hair appointment, so this is when I stopped!)

Session Two:
I tried on the pants (or tried to) but they were way too small. First of all, I made the mistake of not measuring the hip measurement on my RTW pants or the Waist! Duh... I should have cut a 16 or 18! But the most foolish thing I did was to not TRACE my pattern first, so now I have not 16 or 18 left on the pattern. There are other pattern pieces with the "W" sizes, but the waist would be way too big on me.

So, the next thing I did was to measure the gap in the front to get the Center Fronts to match. It was 4" This means that I have to add 1" to each front and back piece. I cut the muslin from hem to waist between the darts and the side seams. The reason I did not cut it up the middle is because the darts should be 4-5 inches away from the CF and I did not want to have to reposition the darts should this work. For my muslin, I only did the correction on one leg front and back to see the difference. 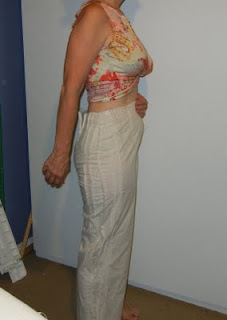 Well, now the CF comes to my center, but it is still too tight. Might be OK in a heavy stretch twill, but not in any kind of light weight fabric. So now, I'm thinking, "What do I do?" I could add another 1/2" to each piece, or I could cut the W size and try to grade it down. Either way, I think I would lose the integrity of the lines of the pattern. Since this pattern happens to be the "fit" pattern for all of the other pants in the Silhouette line, I wanted to make it right. I contacted Peggy Sager asking what the best way to approach it would be, and she graciously offered to send me another pattern at no charge and suggested to make the 18 and then work from there. I am anxiously awaiting the new pattern and want to really get a pant with a good fit. So far, I really like these, but they are just too tight. I am seriously wanting to get Peggy's complete set of DVDs and will probably do it right after payday. In the meantime, I am going to watch all of her webcasts. I have found them very informative and inspiring.

Posted by Nancy Winningham at 4:23 PM

I'm with you about those webcasts! I especially like the pants fitting and a blouse in an hour. I good luck with the new size!

Thanks for sharing the information regarding Silhouette's webcast. I'm still struggling with fit and found the webcast exciting. It make me want to purchase the DVDs as well.

Did you ever purchased the complete set of DVD and was it worth it?

Yes, I purchased the DVD set when it went on sale for $99.00. I'm so glad I did. You never know when a website will close and not have access to the online videos. The purchased ones are not the same, they have more information and some are on different topics. Some of them are quite old, but the information is timeless.

Thanks for pointing out the webcasts! Peggy send you a pattern for free but got (at least one) a new customer through you.