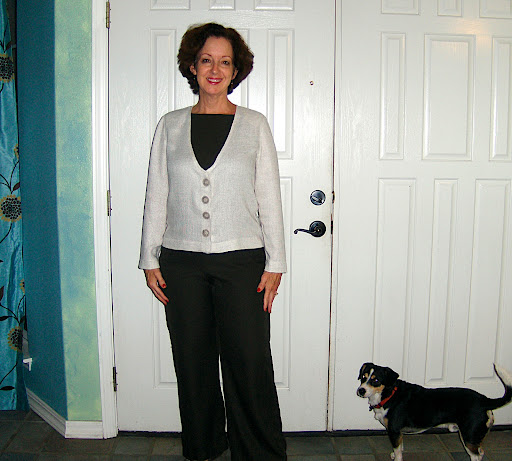 Finished the Garbo tonight. Even though this fabric is really too limp for the jacket, I still like the way it turned out. It doesn't have enough body to completely hide the shoulder pads, but it does hang nicely other than that.

It took forever to straighten the grain on this fabric (a rayon acetate blend) and I finally ended up cutting along a thread crosswise and thread tracing along a thread at the fold line. It was extra work, but I'm really glad I did it. When something as loose as this is off grain, it will really pull and twist. 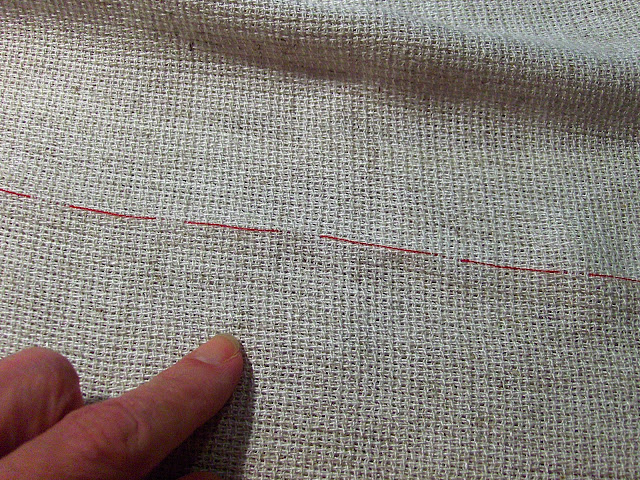 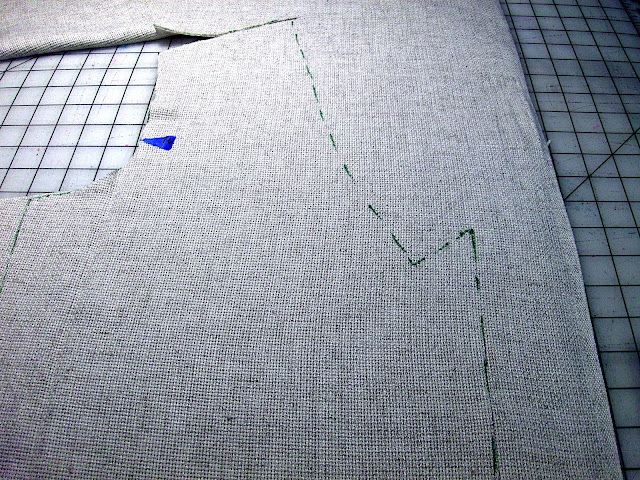 After altering the paper pattern just to raise the shoulder at the neck point (boy that was a quick and easy alteration - so nice not to fiddle with all the darts and tweaking) I laid out the pattern with weights. I traced around it with a marker and then cut with shears. Since the fabric is such a loose weave, I knew snip marks would not show, so I marked the notches with painters tape. This removed easily and did not leave any marks on the fabric. 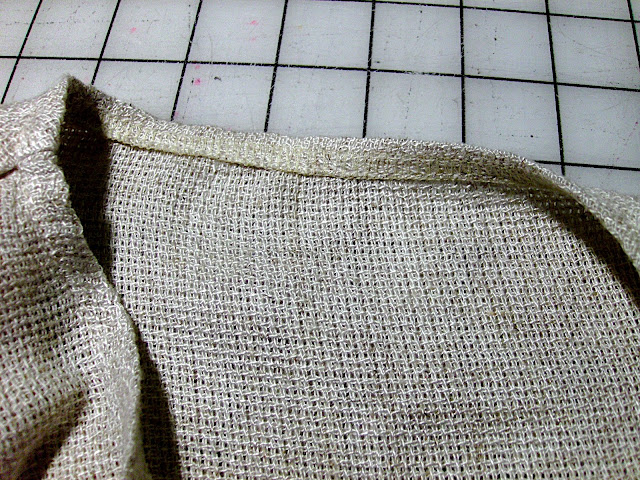 Instead of using facings, I just turned under the neckline. First I serged it with 3 threads using the left rather than the right needle. I serged 1/4" clear elastic to the edge which stabilizes the seam. It does not show since the edge is turned under and stitched down. 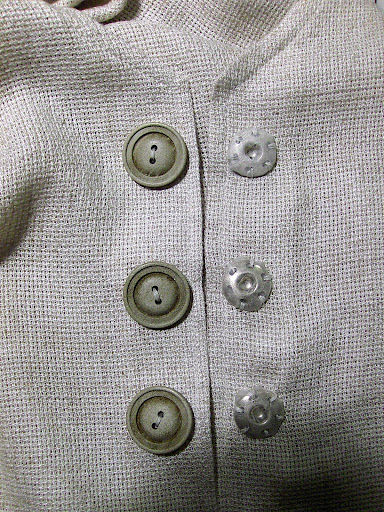 The buttons took forever! The fabric is too loose to support buttons or button holes, so I covered snaps with silk organza and then sewed the buttons on the outside. The top snap looks best since I used two layers of organza. However, it is also the most difficult to snap, so after doing that one, I decided to use only one layer on the other ones. If I find that the snapping gets easier, then I may go back and cover the others with 2 layers. It just looks better to not have the snap showing through so much. When I looked at the jackets in Loes's shop, she told me that she covered her snaps with chiffon.

I really like how this turned out and I must say that I am happy with the fit. I really could not imagine making this without doing a FBA or at least adding a dart. How simple is this?

In my last post, Linda T asked, "How does a class like this work? Is it a "work though at your own pace?" Let us know how you like it." The online "seminar" is really just a PDF with a lot of instructions. I think there was a lot of good information included. Loes is really big on NOT washing fabric before you sew on it. There are other designers that feel the same way and there has been a lot of discussion on this topic off and on on several of the sewing boards. I haven't taken the leap of faith yet, but I do plan on doing it on the next couple of garments I make and see how I like the results. (This is also discussed in some detail in some of Loes's literature.)

All in all, I'm really happy with this jacket. Also shown in the photo above are the Oxford pants which I made out of some cheap fabric last year. Although I really like the pants, I hate cheap fabric. The pants look good from a distance, but they are already pilling and have snags. Very annoying.

Posted by Nancy Winningham at 7:55 PM

That's really pretty! I love it. Now I need to make one :)

Love this latest top you made! You mentioned raising the neckline at the front...how did you do this...did you just add some length to the front shoulder? It sounds so simple and yet if it give the desired results that is great. I have to do a FBA on most garments I make and I would love it if I could make knit tops without doing a dart. TIA

I love this jacket on you. You have fitted it perfectly. Looks so much better on you than on the pattern cover. I always have to look at a Loes pattern finished on someone before I take the plunge. I'm definitely going to get this one, though. Thanks for posting it.

I love the neckline of this jacket on you!

You look happy in it too. I love drapy cardigan coats.

I can see why you like it. The jacket is really lovely on you.

I like it, too! It looks soft and comfortable.

I think the jacket looks fabulous on you! a perfect fit! And, thanks for letting me know about the seminar/class. I think I may dive in.