I tried out some new alterations on these pants and I screwed up! OK, I screwed up in a couple of ways, I think, but the main problem I could have avoided if I would have been thinking. The front piece has side pockets. I was doing a hip curve alteration to raise the side hip according to the measurements I had taken. The problem was that I did the alteration to the front piece at the side - and I did NOT have the pocket attached. whenever you do any alteration to the front of pants, if they have pockets, or any other attached piece, those should be pinned together before doing the alteration. In fact, I should have had the wasitband/yoke attached as well. Not only did this raise the side of tha pants too much, it also meant that the pockets and the front center did not line up at all. I outlined the difference in chalk on these pieces so you could see what I mean. 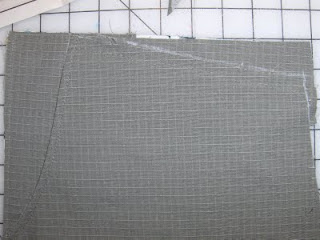 As it turns out, I ended up cutting off almost all that I had added on to the side, but I have not yet sewn on the waist band, so there may still be tweaking to do. I'm happy with the way the rest of these are fitting, but I'm also thankful that the fabric has some stretch!

I have never done a multi-pieced fly before, but I really liked the way this one was done. There is a separate fly piece, fly underlap, underlap lining. The method of putting it in is also different than others that I have seen, and the fly is assembled before any of the pants pieces are put together.
Another thing that is different is that after the fly is sewn together, the outside side seams are sewn. Then the waistband is attached before the inseam or CB seam are sewn. Also, the center back seam is sewn at an angle instead of parallel to the cut edge. In other words, the seam allowance at the bottom of the CB is 5/8", but it is over 1" at the waist.

I did baste the pants together to see if they would fit, so now I will take that stitching out and sew the waist band on before sewing the legs back together.

Since things have been really busy this week, I'm only sewing about 30 minutes a day, so hopefully I will get to finish the pants this weekend.

Posted by Nancy Winningham at 9:35 PM

Just before I read this post I was reading an old Threads magazine (as in issue #3!) and there's an article about how jeans are manufactured. One picture shows how the zipper/fly are constructed separately before they are attached to the pants. I assume that's what your pants instructions are. I'm interested to see how this method works for you.