There have been a few questions about how and why I did the neckline alteration the way I did. 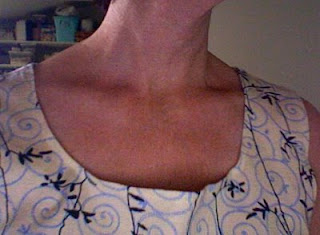 First of all, while I had the top on, I could see that it was gapping in the front. In fact, I am wearing this top today, and have decided to take a couple of small pleats in the CF because it is bugging me! With the top on, I just started pinching out the fullness. I've noticed before that tops seem to need a dart right in the center front.
Well, I knew that would not look good, so I tried pinching out small darts at the side. This made the top lie flat the way I wanted it to. 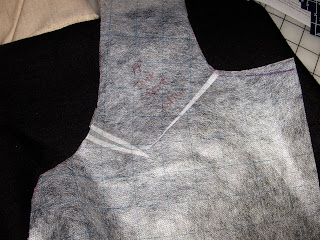 Next, I decided to transfer this to the pattern piece so as not to have to actually put darts in the the top itself. In doing this, of course, this left a bump in the pattern where it would not lie flat. The biggest part of the bump was between that dart and the armhole, so I slit the pattern there until it lied flat. This left a trianglular shaped open space, which I filled with a piece of tissue paper underneath (that is why it looks like two darts, but it is just one slit opened with tissue under neath)

I'm sure I could have rotated that opening somehwere else, but it seemed the best place to do it where I did because that's where the pattern did not lie flat. You may never find this alteration in a fitting book, but it works for me on this style top. :-)

Also, in the directions for this pattern she has you take your bust and upper bust measurements. All fronts have a darted and undarted version. Depending on the difference between upper bust and full bust, you know which front to use. I used the darted front. (I did measure, but knew there would be no question! The fuller your bust, the more you need the darts in order to add to the length in the front. Otherwise, your tops will hike up in the center.) What I did like is that this is a much smaller dart than I usually have to use, so I think it looks better.

Posted by Nancy Winningham at 11:18 AM

my motto is "if it works it's right"
I have teh same proboem, so I'll try your tweak. Tops are sometimes too loose there if they are big enouigh for the bust

I have the same problem, I buy my patterns using my upper or high bust measurement. I have made the same type of adjustment and the problems was the bump in the pattern. Thanks for the tips!

Definitely using upper bust measurement. If I used my full bust measurement, I couldn't even get it to stay on my shoulders! I do have a hollow chest, so this tweak seems to work for me.

I have seen this alteration, and I make it myself. As we get older, I hate to say this, but the upper chest tends to get narrower as our shoulders get a bit more rounded, so this doesn't really show up in upper bust measurements. Taking small enough overlapping slices like that that stay flat work just fine.