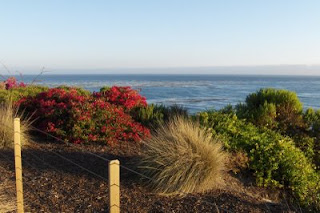 July is a fun month for us and also my one month of real vacation. June seems to go by so fast and entails a lot of catch up on appointments, paperwork, cleaning, etc. I start back to school the first week in August, so really, July is the month that truly feels like vacation to me. Not only that, but our anniversary is on the 7th and my birthday is on the 11th, so we usually do something to celebrate. We love to go to Hawaii or Mexico, but this year, that is just not in the budget. So, instead, we went to Pismo Beach. It is only about 2-1/2 to 3 hours from here, so its an easy trip. It's been in the 90s here and not cooling down much at night, so the 50s and 60s were a welcome change. It did get up to the 70s for an hour or so each day, still a far cry from 95-100!
We stayed at an inn called the Spyglass and had an ocean front room. There also was a restaurant there right on the edge of the water. One night we even saw dophins jumping out of the water while we were eating dinner. That was the first time I"ve seen that (except in a zoo or something) so that was pretty awesome. We could also hear the sea lions early in the morning. It was really a nice getaway. 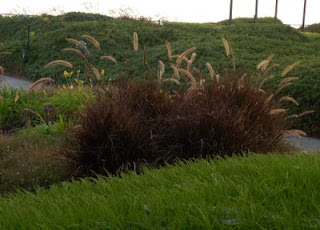 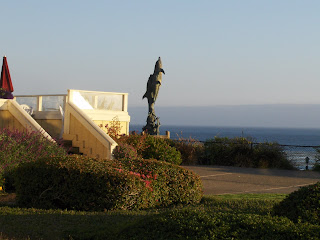 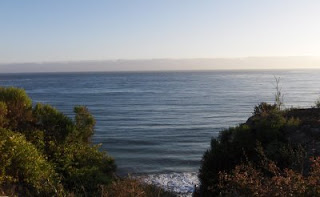 Of course, while we were there, I had to check out the local fabric shops. There are not many fabric shops at the coast, but there are a few quilt stores.
The first quilt shop I went to is called Quiltin Cousins, and that is actually in Pismo Beach. It is a really cute store, friendly owner, and a good selection of cotton prints. They also have a lot of different patterns, including things like Amy Butler and Indygo Junction. I bought 2 pieces of fabric there.
One of the days we took a drive into Morro Bay (about 20 minutes away) and had lunch. They have a quilt shop there, which is actually bigger than the one in Pismo. It is called The Cotton Ball, and even though it was larger, I did not like it as much. They weren't as friendly there and their fabric was more expensive than at most quilt shops around here.
On our way home, we decided to take a drive into San Luis Obispo, which is a college town. We were just driving around when I happened to see a store called Betty's Fabrics. This fabric store was great. Half of the store was all quilting cottons, and they really had a large selection of good quality fabrics. The back wall of the store was all decorator fabrics and the rest of the store was dressmaking supplies. They had wools, silks, linen, rayon, shirtings, satins, knits, boucles, just about everything.
In one little corner they had a locked cabinet with glass windows. Inside this cabinet was a very nice selection of ultrasuede fabrics. then, down at the very bottom, something caught my eye. There were just the ends of some rolls of fabrics, and you could barely see them. The first one that I could actually read the label on was an imported cotton lawn. The next one said "Liberty" on it. I asked the clerk to open the cabinet for me, and there on the bottom was a whole row of Liberty of London Prints. The cotton lawn that was there (I can't remember the brand, something like "Tany or Tawny") felt like silk. It was really nice, but $22.50 a yard was a little high for me right now. I must have looked at those Liberty prints for about 20 minutes before I actually picked one out. The fabric is only 36" wide, so I thought that 2 yards would be the absolute minimum I could get to make even a sleeveless top. The first one I picked out only had 1.5 yards. Not enough. The second, third, and fourth prints I picked out had even less ! I was disappointed. The rest of the bolts were a wool and cotton blend, which is what I finally chose. I don't know why I picked this print, but no matter what other print I picked up, my eye kept going back to this one. It's not the kind of print I would usually choose, but something about this kept after me until I bought it! 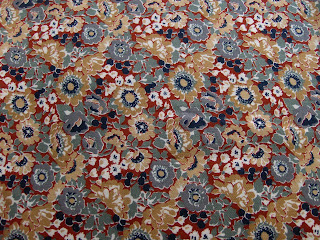 Posted by Nancy Winningham at 7:49 PM

What a fun trip and the discovery of the Liberty gems at the bottom of the cabinet is a great find. How fun!

What a great trip and even better than you got some Liberty fabric!

happy belated b-day! what a fun trip. we had to go out of town suddenly for my mother in law's funeral. we got to visit family in WA, which was nice, but we'd rather it been for a better reason to go over.

looking forward to see what you sew up next.

Super trip - Pismo is one of our favorite vacation spots. I'll have to figure out how to get DH to that SLO fabric shop.