If you read my last post, you know I am making a wedding dress for my daughter.  I finally got her measurements and decided to start with a size 6.  I know it will be too small, but as it is, it may be too big in the shoulders.  We will have the first fitting this weekend.

I'm so thankful that I took Kenneth King's busier class on Pattern Review and Gertie's craftsy class (sadly, no longer available) on Craftsy.  I know what I need to do even if it is not stated in the pattern.  This pattern does not call for boning, but I may add it anyway.  I will probably use rigeline boning. 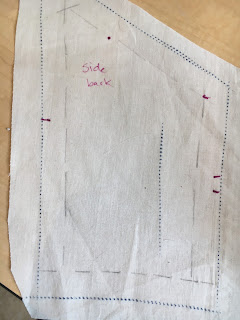 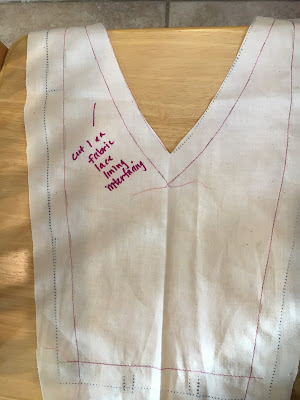 The next step is to thread trace the pattern pieces.  Yes, its a little time consuming, but it is relaxing sewing and easy.  It also makes putting the pattern pieces together much easier and much more accurate. 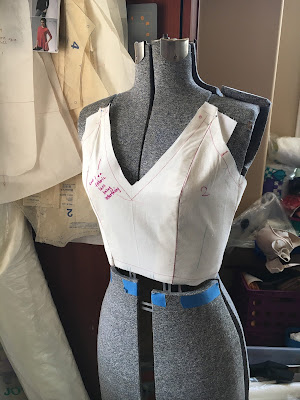 So I did all of that yesterday.  Today, I assembled the bodice.  First you assemble the center front to side front, side back, and center back pieces.  That's 7 pieces right there!  Then there is the yoke piece that goes from the front to the back.  I don't have a picture of that one yet.  There is also a neck band, but I will not be using that at this stage.  All I want to do right now is get the fit of the shoulders, bust and waist.  I also need to make sure the BW length is right.  We won't have a fitting until Saturday, so I'm really tempted to do some selfish sewing in between.  However, I am also making the flower girl dress, so I guess that will be my next muslin.

All in all, I don't think this dress will be difficult, although the neckband instructions were not making sense to me.  Probably one of those things that when you are doing it, it actually becomes clear!

Posted by Nancy Winningham at 8:49 PM

It looks beautiful already! Good Luck with the wedding prep.

Really looking forward to seeing how this comes along. I am so tempted by the Simplicity 8289 for my wedding dress so especially keen to see what it looks like at the end!