A big THANKS again to Cidell for sharing her BWOF 8/2002 with me. I have completed the three piece "suit" 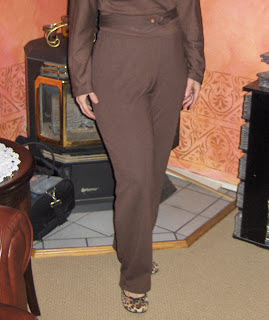 The pants were super easy. Just an elastic waist and four seams. I used my serger for everything except the hems and casing. I did take two inches off the top to lower the waistband, and I took in the sides a bit at the waist so as not to have so many gathers. These are super comfy and the knit is called "ponte de roma" which is a poly rayon blend. It is super soft but has enough body to hold it's shape.

The tunic was also very easy. I found the best way to do the fold under on the slit was to press a 5/8" seam and then fold the edges under to meet the fold. I pressed this and put the clapper on top to make it hold it's shape. A little secret - there were a couple of places where it looked like it wouldn't stay turned under and I didn't want to pin it, so I used a couple of pieces of "steam a seam lite" to tack them down. I cut a 38 on the top on this and tapered out to a 42 at the hips. I probably should have gone with a 36 and FBA because it is still a little big in the shoulders. That's OK though,because after all, this IS comfort wear. 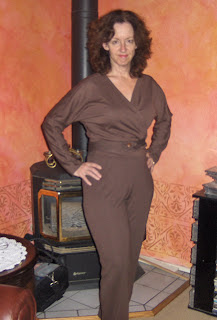 The wrap was a pain to cut out because the pieces were so big. I didn't have enough fabric the first time, so I thought I would just cut it with short sleeves since the tunic has long sleeves. Then I ended up cutting one of the pieces on the wrong side, so I had to buy more fabric anyway. As it is, I didn't cut the ties long enough (the pattern calls for 25", but you really need about 35") so I ended up having to use a button instead of tying it. I don't really like this option, because it is still a little snug around the waist. Also, I should have cut a smaller size in the wrap as well. I may take off the ties (good thing I sewed them on by hand) and just put a button on each side of the wrap. And speaking of buttons, my machine is really picky with button holes. I think I tore out the button hole about 5 times until I was ripping out fabric threads instead of buttonhole threads! I decided to use the "stretch" button hole on my machine, and that seemed to work much better.

I have to say that I will be getting a lot of use out of these pieces. I will have to make a couple more pairs of these pants for lounging around and maybe make some long sleeve t type tops to go with.

DVM Cindy emailed me and asked me if I wanted to do a sew along on this jacket from BWOF 10/07. How could I resist? I have so much stash, I thought surely I could find something perfect in there. But no, everything was not quite right. Well, I DID have a 50%off coupon from JoAnns, so I found this great embroidered suedecloth that I plan to use for the jacket 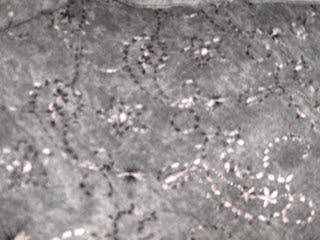 The fabric says "do not dry clean" and "do not press" OK, That means I will need to use a poly lining since I can not be ironed or dry cleaned. Fortunately, I have about a yard of black lining in my stash and it's just about what I need for the jacket. It looks like a few others on BurdaEnglish and Pattern Review are going to join in to the sew along. Anybody interested???

Posted by Nancy Winningham at 5:40 PM

What a great ensemble. I have the feeling you and Cidell have just started a "sweatsuit alternative" trend!

Very cute!!! I want to do that jacket, but I am going to trace out my first bwof this weekend! Hmmm, when will the sew along start? lol

Comfortable set Nancy, should make something like it for myself. I love to see how the different jackets will be from the sew along. I love the design, but have a few other things higher on my to do list.

I know I'm biased, but I love this on you. And I like the jacket. Hopefully I can find some fabric for it soon to make it up.

Fabulous, Nancy! You look very elegant!
Out of curiosity, "Ponte de Roma" in Portuguese means "Bridge in Rome"! I think it's the same in Italian too. I wonder if that knit came from Portugal or Italy...

LOVE this one Nancy, looks great on you!

...and on a side note, I had to look twice at the first picture cause I thought you were at Fugazzis, the wall looks great (still).

Wow! I wonder if Tim Gunn realizes how many sweatsuit alternatives he has spawned! :) This looks nice on you and I am glad that you were able to find enough fabric "to make it work!"

This is lovely! And you look great in that chocolate brown