I have always loved sewing by hand.  When I was younger, I learned to embroider, and I embroidered tea towels, shirts, table runners, and lots of other things.  There's just something nice about making stitches by hand.  As I became more confident with garment construction, I incorporated more and more hand stitching.  I enjoy putting in a hand picked zipper.  Of course, when I was first learning to sew, there weren't all of the tapes and fusibles available today.  Facings were sewn down by hand as were linings, hems, and basting.  My mother hated hand sewing, but I kind of liked it.  She loved to knit but hated sewing the pieces together.  I didn't like to knit (I do now although I'm painfully slow) but I like hand piecing.

A few weeks ago, I ordered a copy of Alabama Chanin's Studio Style + design.

I had seen several reviews from garments made on Pattern Review, and I thought I'd check it out.  I had known about the Alabama Chanin books for years, but I guess I didn't really understand what they were all about.  Well, now I'm hooked!
I was first inspired by the fitted top, but I'll write more about that later.

I was surfing the internet looking to see what people had done with either the AC patterns or from inspiration from her techniques.  I ran across this post by Rice, and was inspired.  I HAD to make that skirt!  The next day after work, I ran over to the Bargain Basement (or whatever that place is called in Exeter) and bought three size 3XL T shirts for $6.99 each.  I would have gotten 4XL if they would have had it.  The only fabric store around here is JoAnns, and we also have a Hobby Lobby.  Neither one of them carry cotton jersey.  I took those shirts home and threw them in the wash.  Then I traced the skirt pattern out of the book and cut up the black Tshirt.  The pattern just fit on that shirt (I cut a size large according to my measurements.)
These are the materials that I used: 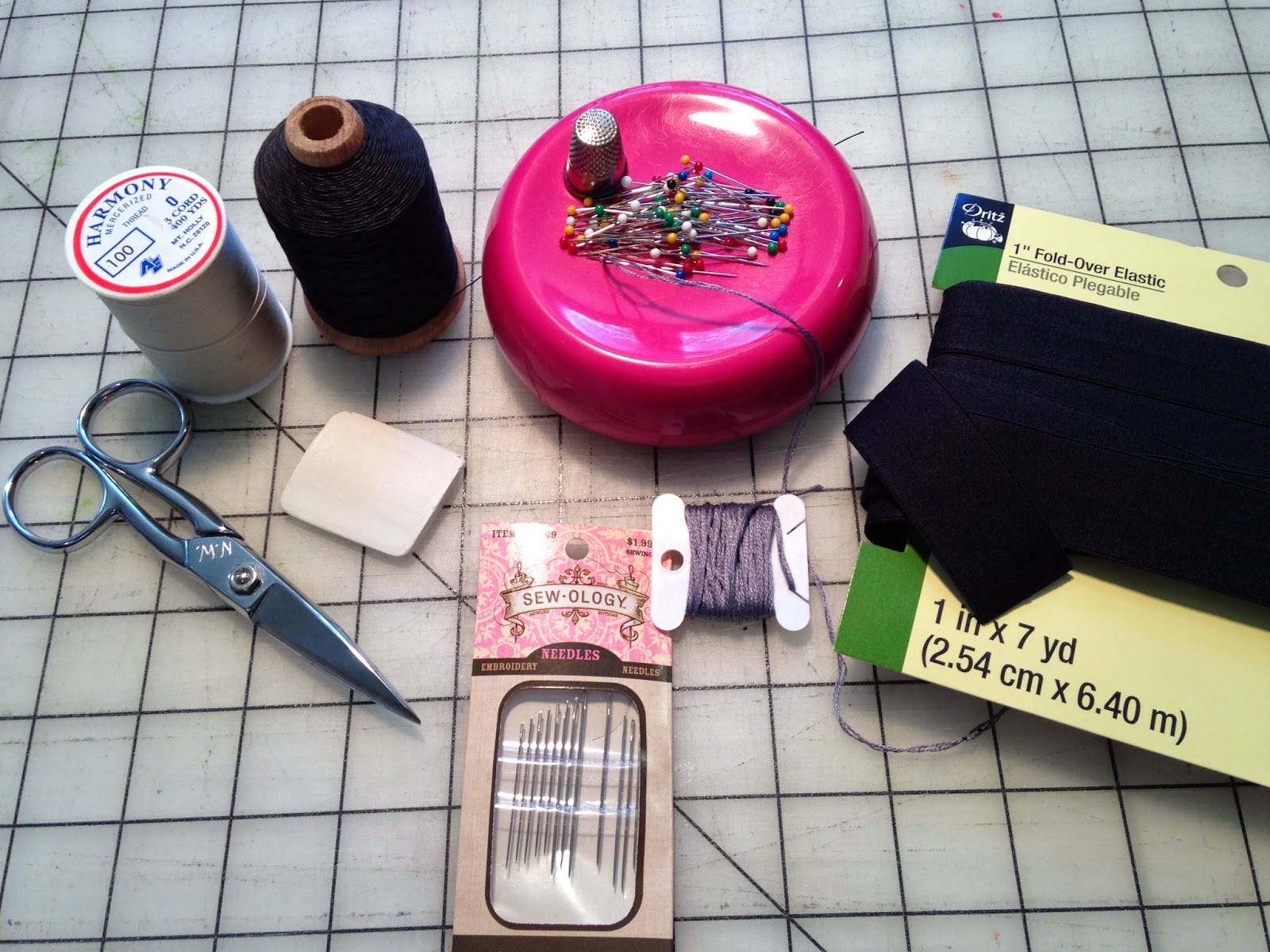 After tracing the short skirt pattern from the book, I chalked around it on the fabric and cut it out.  I basted it together and saw that the fit was pretty good, but that I needed to take it in at the waist, which I did.  I probably should have taken it in a little more, but now it sits about an inch below my belly button, which is actually pretty comfortable. 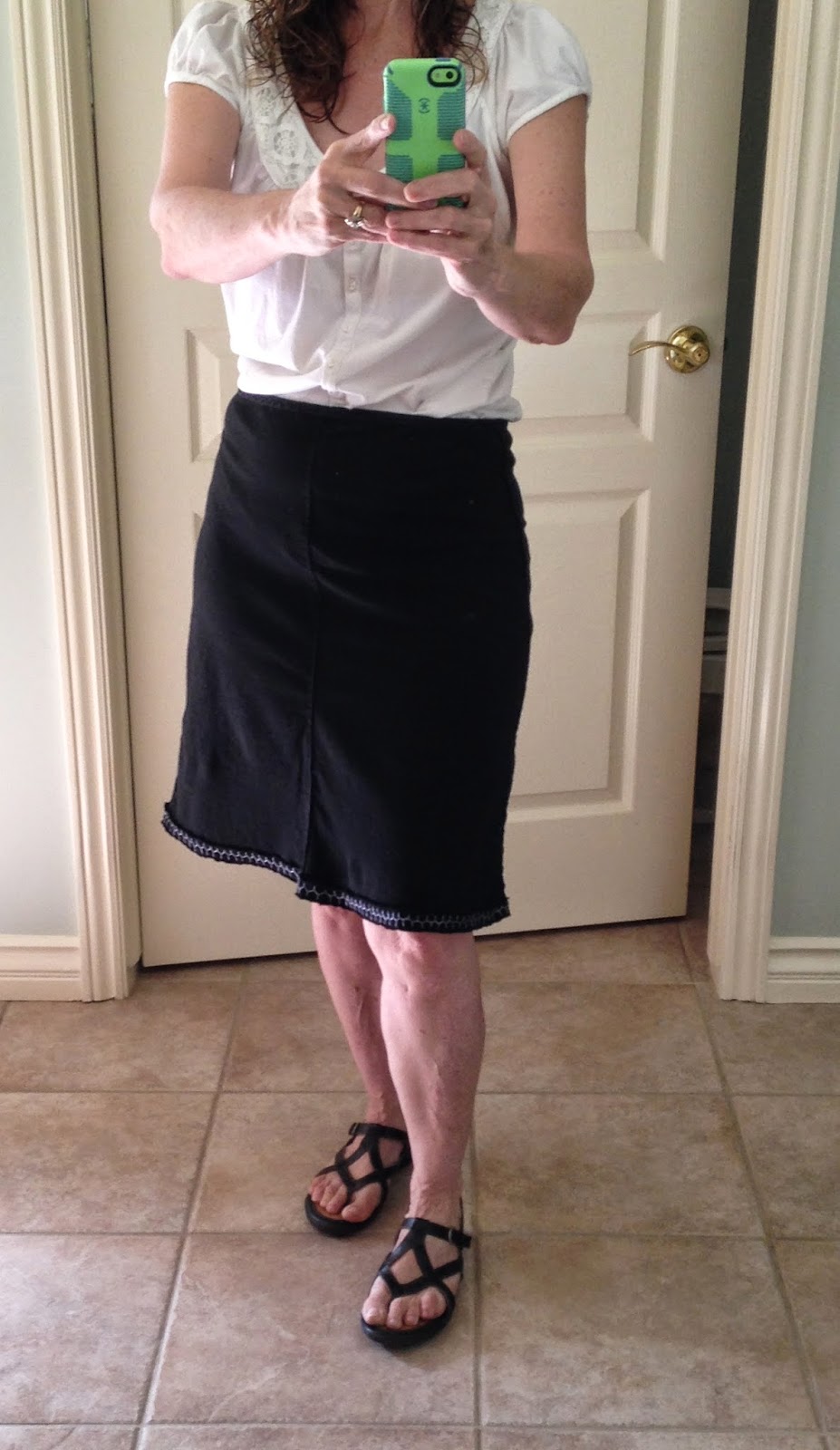 The skirt is a 4 gore and I stitched them together with a running stitch using buttonhole twist thread.  The stitches are longer than you would use with regular thread.  I pressed them down and then topstitched them using the same type of running stitch.  The AC book calls this an inside felled seam, but this is not what we typically call a felled seam.  Mock-felled is more like it.  BTW, the seams on these patterns are 1/4", so that makes it pretty easy with the hand stitching. 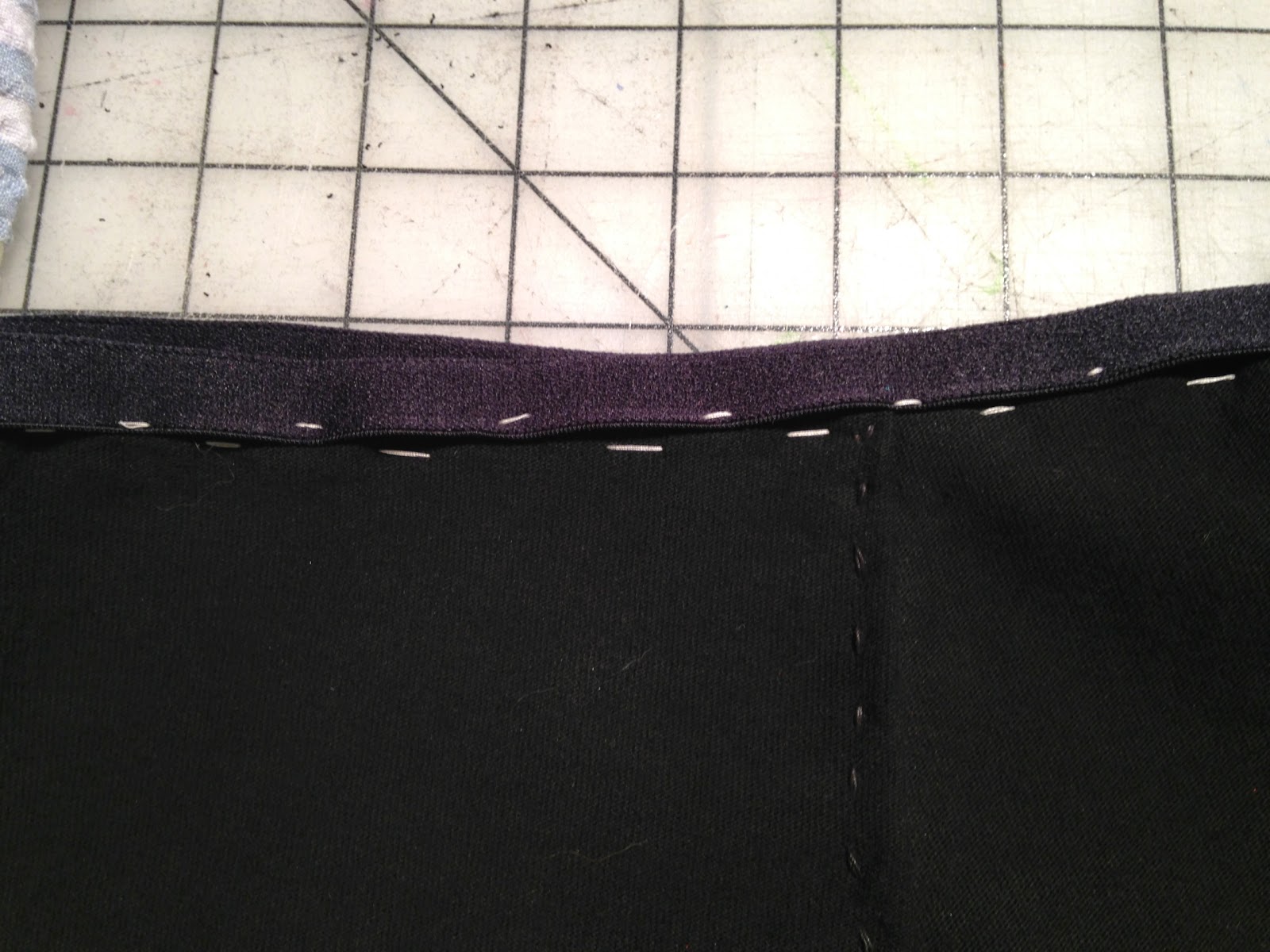 I sewed fold over elastic at the waist edge.  I had it 1:1 at first, but that was too loose, so I shortened the overall length about 2 inches.  I probably could have gone more than that.  First I basted the elastic on because the pinning left too many gaps.  I used a stretch basting stitch that I made up! 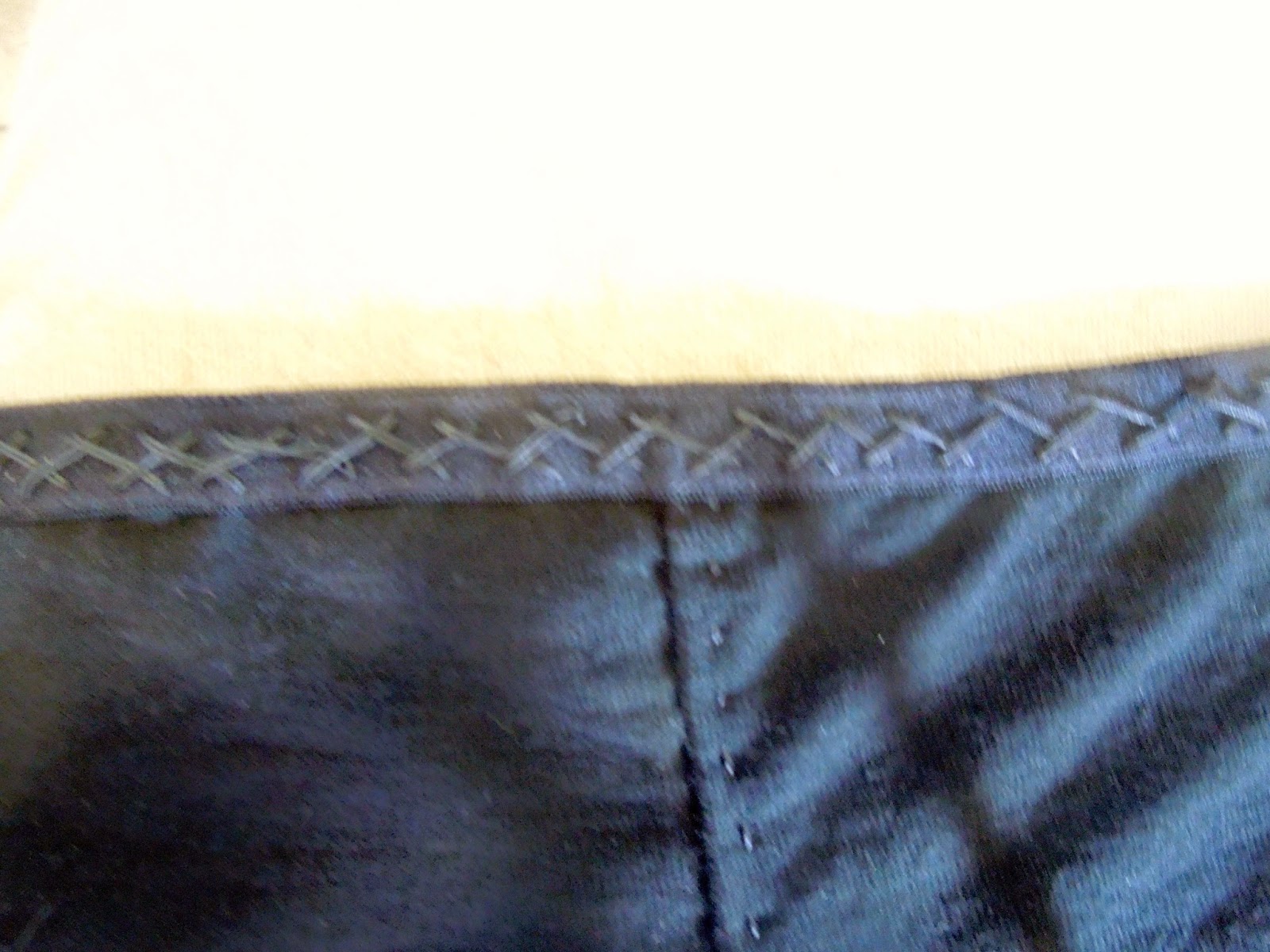 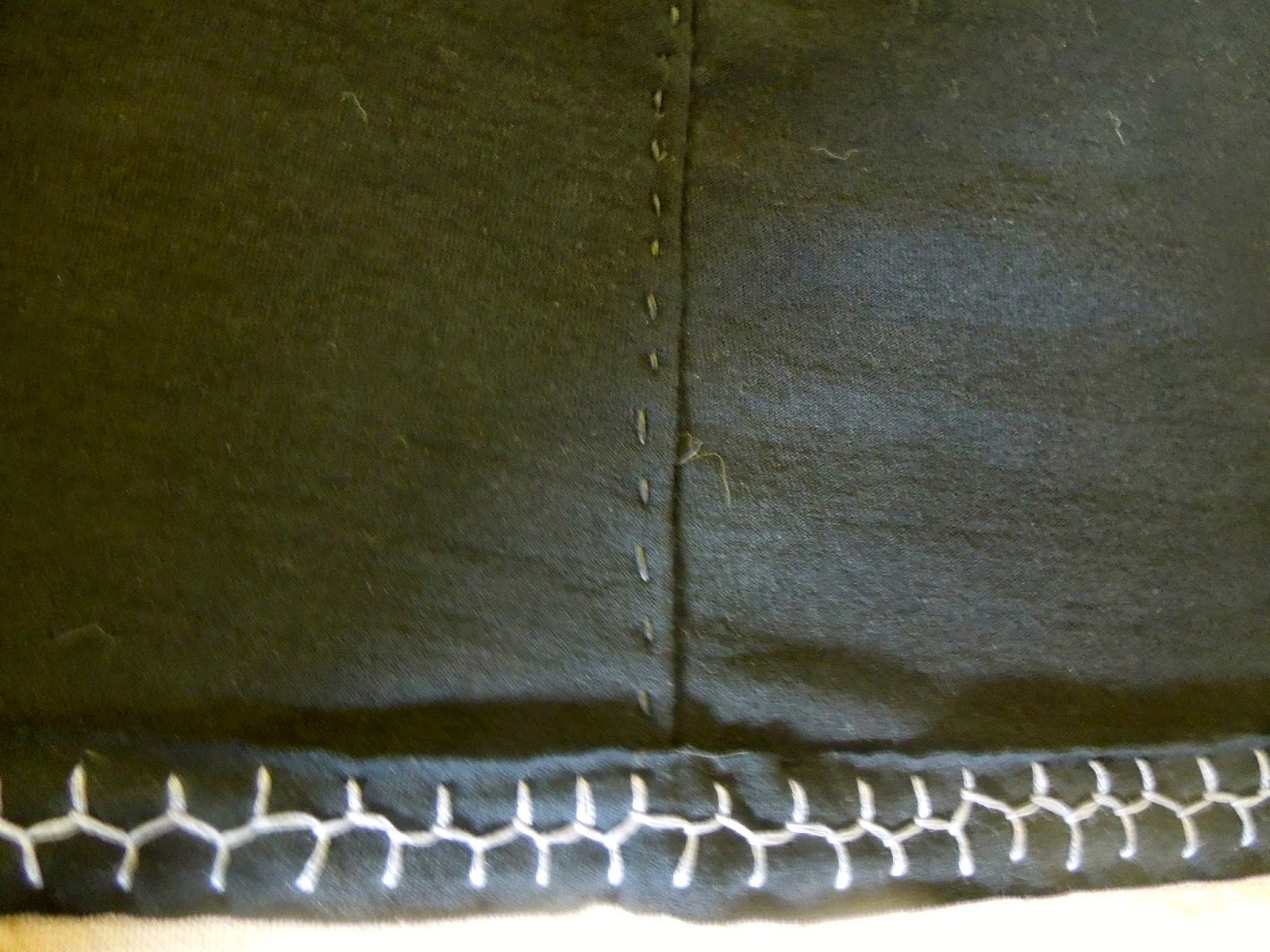 I tried pinning a couple of different trim styles at the hem but was not happy with them.  I finally decided on just using a flat piece of the fabric (right side facing up!) and using a cretan stitch.  I used embroidery floss (2 strands doubled) for this.  I wanted something right at the edge that would keep the hemline from rolling under.  I also wanted something to give it a little extra weight to hang better.  I thought about beading, but decided to save that for another project.  I wanted to wear the skirt! I really like the effect of this, especially since I washed it, and it was able to roll and deconstruct a bit.

All in all, I'm really happy with this skirt.  It is super comfortable and cool.  (It's already been in the 90s here!)  The only bad thing about black cotton knit is that it attracts animal hair like a magnet!  I know there will be a lot more of these in my future!

Posted by Nancy Winningham at 1:40 PM

Nancy, I love this skirt!