I've always wanted to be a fan of TSW patterns, but have always shied away from them due to the boxy shapes and loose-fitted designs.  I've always felt like fitted silhouettes are more flattering.  But sometimes a girl just wants something comfortable that still looks good!!  I've noticed lately that I have a shortage of long sleeved shirts in my closet. A while ago I bought the Sewing Workshop's Now and Zen shirt pattern from someone  on PR.  I don't even remember who I  bought it from, but unfortunately, the pattern had a FBA done to it (incorrectly) and with 2" added (I only need 1.5" added in length)  This is easy enough to correct, but the worst part is that there was tape put on BOTH sides of the pattern, so it is impossible to take it off or iron over it.  I guess I learned my lesson about purchasing used patterns!  Anyway, I traced the pattern and compensated for the added length and corrected it for the amount I needed.  According to the pattern measurements on the envelope, I needed an XS in the shoulders and a S at the bustline.  I still decided to compare these pattern measurements against a shirt that fits me well, but there was no way for me to really tell since this pattern has a totally different shoulder and sleeve line.  I decided just to make a muslin.  For some reason, I could not find my regular muslin material, but found this old piece of quilting cotton that I knew I was never going to use for anything except perhaps pajamas - and there wasn't really enough for that.  Just 2 yards. I decided to use this for a muslin for the Now shirt.

First I just cut out the basic bodice front and back and basted them together.  I had guestimated where to put a dart and it landed in the right place!  Even the slope of the shoulders was right for me.  I still felt like the top was a bit baggy on me, and did some tweaking by pinning out some of the extra fullness.  I didn't want to do too much, since this is not a fitted shape and meant to be somewhat loose.  I ended up taking a vertical tuck of about 1/4" folded (total 1/2") on each side, which will take an inch off the width in the front.  I did the same in the back, so this will lessen the total circumference by 2"  I think there will still be plenty of room after this.

I also wanted to see how the sleeve would fit, so since I was doing all of this, I went ahead and just made the shirt!  Surprisingly enough, I really like it.  NOw, this is not the fabric I would make as a first choice to make this shirt, but it's actually not as bad as I thought.  Since it is winter, I will be always be wearing a jacket or cardigan with it, so that will also tone down the splash of colors! 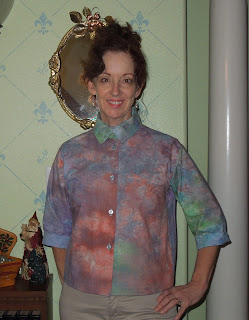 I actually really like this pattern and will make it again.  I did buy some other cotton to make this out of that has a lot of orange and purple in it.  I would also like to make it out of flannel or corduroy, and maybe also out of linen.  I wore it tonight to the movies and it is really comfortable, but I feel better dressed that if I were just wearing a T shirt.


The partner piece in this pattern is the "Zen" shirt.  I haven't checked out the collar construction yet, but the difference I see is that the Zen is about 5 inches longer and has a back pleat.  The collar on the Now shirt is interesting in its construction and I really like it.  It looks good both buttoned and unbuttoned.  I plan to cut out another of these tomorrow.

Posted by Nancy Winningham at 11:08 PM

Pretty! I love the fabric!

Looks good. Glad it worked out so well.

I feel the same way about the boxy styles of TSW, but you did a great job of fitting on this one. Looks very nice.

I like this top! Bits a fun weekend kinda top. Glad you found success with the first one and can't wait to see the next one.

I am adding your blog for nomination for an award...here is a link from my blog to yours: http://fitforaqueen.wordpress.com/2012/12/29/passing-on-an-award/
I enjoy following your blog and wish you a very successful sewing year of 2013!

what a cute shirt!

Great proportions on that blouse. It looks great and both blouses are very pretty.