can't believe I'll be leaving for Uganda in just over a week!  I've been trying to get some sewing done so that I have something to wear on my trip!!  For that reason, I chose the Classic Blouse by Peggy Sagers because I knew it was fast and easy to make.  I'm pretty much a tank-top girl myself in the summer, but in the villages of Uganda, the women do not bare their shoulders or upper arms very often.  In fact, pretty much never!  So, I decided I needed some short sleeved shirts.  Also, in the city, you rarely see the women wearing T-shirts.  Usually they wear dresses, two piece dresses or suits.  Yes, I know that sounds surprising, but the one thing that always stuns me is how well they dress. Their clothes may be old and used, and "out of date" according to US standards, but in the cities you always see their clothes to be very clean (surprisingly white with all that red dirt) and neatly pressed.  The men wear long sleeved button shirts and slacks and the women usually wear fancy dresses.  And by fancy, I mean - think "prom"!  THis cracked me up the first time I went there.  Some women were wearing regular street clothes, most were wearing skirts or dresses, and some (many) wore the kind of dresses that we would only wear to an event.  We're talking sparkles, beads, satin fabric, lace, etc.  First of all, this shocks me because it is so HOT there and I can't believe these women would want to have all of these tight-fitting, long sleeved, heavy clothes on.  The other thing that is surprising is that out in the villages, the traditional dress for the women is something called a "Gomez"  This is a dress made with yards and yards of fabric wrapped multiple times around the body.  The typical fabric for this dress?  Polyester charmeuse!!!  Could we pick a hotter, non-breathable fabric?  It's amazing.  Many of the younger women wear a dress style called a Kitenge (not sure of the spelling)  These are more like a fitted two piece dress made from a wax print cotton fabric.  Of course, they are lined with broadcloth, so they aren't' a whole lot cooler to wear, but at least cotton breathes.  This dress style is more "modern" and I believe it comes from Kenya - but I've heard different stories on that too.
Well, I won't be wearing any Gomez's or Kitenge's (even though I have one) on this trip.  I will be wearing long dresses, long skirts, and short sleeved blouses or tank tops with a blouse over the top.  I picked a poly/cotto broadcloth because it is light weight and should pack easily.  Hopefully it won't need to be ironed. 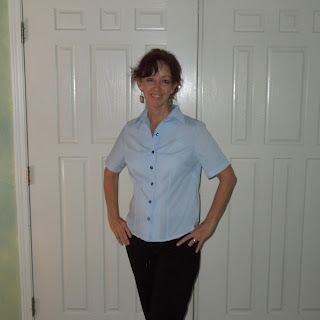 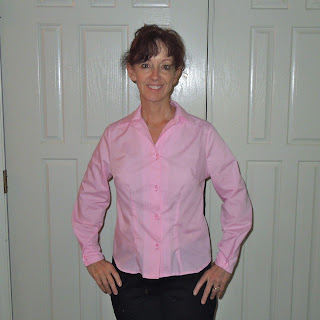 I have made this blouse before, but knew I needed to adjust the size.  I cut a 1 at the shoulders and 2 at the bust.  I used the "D" cup pattern.  On the blue blouse, which was my second version, I lowered the point of the bust dart by 1/2" and raised (lengthened) the vertical darts in the back.
This blouse does not have a cuff, but you fold the sleeve, make a button hole, and then fold the buttonhole over to the button.  I had to take this out the first time because the button ended up under my wrist.  If you want to make the long sleeved version of this blouse, I would suggest that you pin that out first before you make any buttonholes. 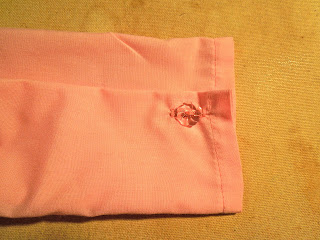 The collar on this blouse is one piece, meaning there is not a separate stand. At first I did not like this, but now it does not bother me, and it certainly is faster to make this way. 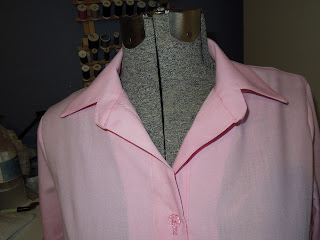 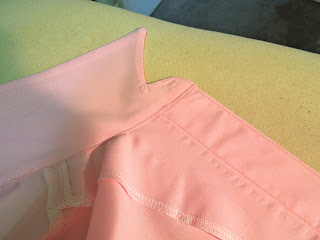 I will probably make more versions of this blouse this summer.  I have some silk I'd like to try for this.

Posted by Nancy Winningham at 9:14 PM

Pretty and practical for summer!

Pretty blouses!
It seems strange to me that the "traditional" dress would be polyester..something that's been around for only 60 years or so.
I've often wondered if the children (in particular) are wearing donated clothes from overseas, and things like out dated prom dresses don't have anywhere else to go.

Interesting about how Ugandan women dress. Your Silhouette shirts look great. I love the fit of Peggy's patterns.Have a great trip!I admire what you do.