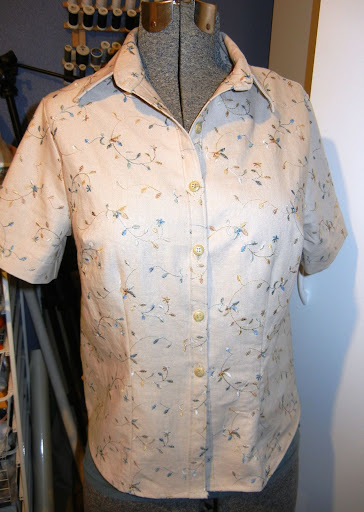 Lately I have been obsessed by Peggy Sagers and Silhouette Patterns. I have been watching the live webcasts and even the reruns that are on her site. I have ordered several patterns, and tonight I finished this version of the classic blouse. There were several things about this pattern that I really like.

First of all, all of PS's patterns use 3/8" seams. I like this because it eliminates the step of trimming the seams. It also makes it easier to fit curves and smaller corners. The instructions are very simple, but there is the assumption that you know how to sew. For example, on the blouse it just says to add buttons and buttonholes. They are marked on the pattern, but that's about it. 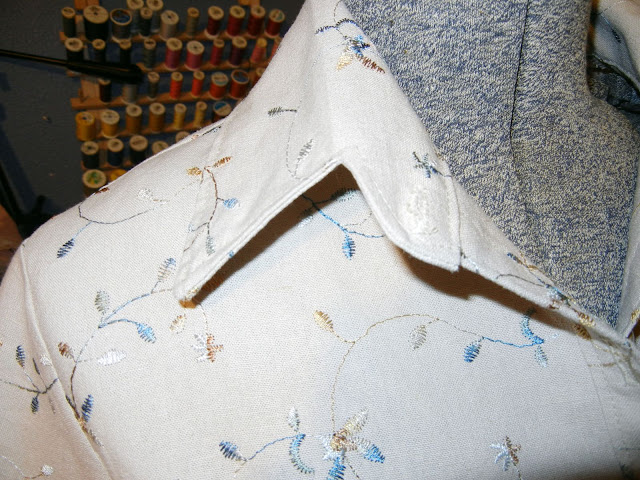 The most interesting thing is the way the collar and the front facing are done. The front facing is folded over to the front, and that is what creates the front band. The collar is assembled first, and then the seam allowances on the neck edge are pressed inward. Then, after the blouse shoulders are sewn, the collar is just slipped over the raw edge of the neck and top stitched on. This is the fastest, easiest way to make a collar I have ever done. This pattern has a one piece collar, but you could do the same thing with a two piece collar. Also, I used Peggy's method of turning under the seam allowances at the point and not clipping the corner. You can click on the picture to see more detail of how nicely it turned out. I made the short sleeves for this blouse, but next time I would like to change that to a cap sleeve. I will also (at some point) make the longer sleeve.

I used a size 2 with the D cup. The one thing I always have a problem with in blouses is too much fabric between the bust and the shoulder. When I am standing up, the bust darts are in the right place. I did lower the shoulder seam 1/4 inch front and back, which eliminated a bit of the problem. I feel like the shoulder seam is in the right place, although I may bring it in 1/4 " on my next attempt. I'm wondering if maybe I should have cut a size 1 and just made it bigger at the hips, although it seems to fit fine in the bust.

I would have to say that this blouse fits better than any other that I have tried with the least amount of adjustment. I love that the pattern pieces are marked by cup size so that I do not have to fiddle with a FBA. I can't wait to make this again and to try some of her other patterns. 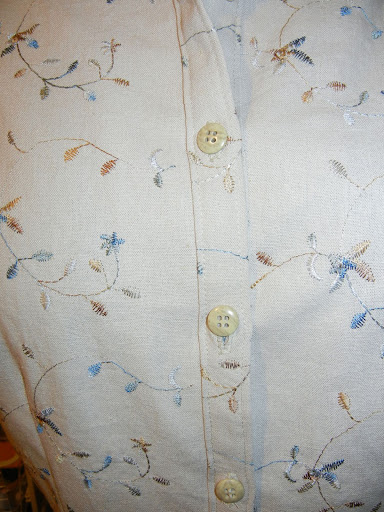 Posted by Nancy Winningham at 9:40 PM

The blouse has come out looking great, and also looks good on you. Some lovely topstitching and pressing there, looks very professional.

Terrific blouse. I'm just jumping on the Silhouette train, so am very interested in opinions about her patterns.

Looks fantastic! I,too have several of her patterns. I've recently made her yoga pants. They are terrific!

Thanks for posting this blouse..love it..and am going to order one for myself. The collar sounds like a dream. I really like making my own shirts. Nice ones are so hard to find in tht classic look.
Great fabric!!

That is a pretty blouse. Great job.

Terrific fit on that blouse, definitely a great TNT foryou.

Love the blouse. The fabric is lovely. I too have this pattern and I too love it. I mad my first out of a batik and the blouse looks just as good in a fabric with a lot of drape.