Ironing in the Village

Yes, the women do iron in the village. But how do you do that when there is no electricity? Well, this is how! 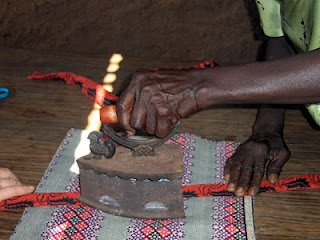 It is called an "iron box". You go into the kitchen (a mud room with a fire and rocks holding up a pot of whatever is cooking) The smoke from the fire is usually pouring out, so we poor mzungus have our eyes filled with tears everytime we get near it, but it doesn't seem to bother the ladies who are sitting in there through out the morning cooking food. You must get coals from the fire and put them into the iron box. It really works. Sometimes.

The first day we tried to use the iron box, the coals were not hot enough. It was too early in the day and the fires had not been burning long enough to get good, hot coals. Therefore, the iron was not hot enough and was basically useless. We, of course, did not understand this, having never had to use a fire for anything except enjoyment (and I don't even have a fireplace either) except for the yearly camping trips when I was a child. Of course, I was a child then and not in charge of the fire! Well, back on track here, we just thought that these were kind of ineffective and so decided to go ahead without the benefit of an iron. Never thought I could sew without an iron, but you do find other ways to press open seams - like warm fingers, sticks, and pulling the fabric over the edge of a sharp corner, like on a table. 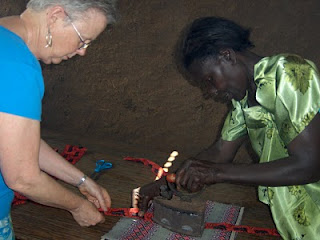 The following day, we had had HOT coals and it was amazing how well this little iron worked. We didn't have an ironing board, of course, but we did have a table. We also used a brick to keep the iron on when not in use. Of course, for us, it was clunky and difficult to use, but the women of the village were very adept at using this iron and "went to town" with it.

I really wish I were sewing today instead of having to go to work. I'll even have to go to work tomorrow, my day off, because progress reports have to go home. Is it summer yet?

Posted by Nancy Winningham at 6:52 AM

My grandma had some cast iron clothing irons in her house. She told me that way back when she was a kid, people would heat them on the wood stove to iron their clothes. You usually would have a set of two, one to heat and one to use, then you'd switch off when as they cooled. This was before electric appliances became popular in the 1920s--sure makes you appreciate what we have doesn't it?

Wow. That gives you a better appreciation for what we have everyday that we take for granted.

Makes you realize how much you take for granted. Nice post.