Yesterday I made a muslin of the top, and after numerous adjustments, I think it's going to fit. I'm concerned because it is still pretty tight in the waist, but according to Kenneth King, there should be no ease... and honey, there aint no ease in this! A couple of years ago, I took an online class on PR with Kenneth King on making a bustier. I'm hoping to incorporate some of the techniques into this garment. 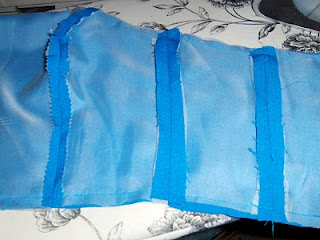 First of all, the whole foundation of a strapless dress is in the lining. The lining holds the boning and the waist stay. Also, there should be a strong supportive fabric as an interlining between the lining and the fashion fabric. KK recommends using wool felt or unwashed denim, but I didn't want this to be a suit of armor. I did want something that would not stretch or give, so I decided to underline the lining with silk organza. I'm hoping this will give enough support while still being light weight and cool. The vogue pattern doesn't call for any underlining at all, so it will at least be a step up from that. This dress has a lot of favorable reviews on Pattern Review, so I'm really hoping for a good result. I have never made a strapless dress before, and probably haven't worn one for 20 years!

the next step on this dress will be to put the boning in the lining. KK recommends using rigeline boning, which I like, but the Vogue pattern called for covered, so that's what I'm using. The advantage of rigeline is that it supports the bodice all along the boning. Covered boning only supports at the top and bottom of the seam since the boning "floats" inside the casing. I've only used rigeline, so I wanted to try the covered and see which I liked better.

I have to drive out of town tomorrow, but I hope that I can get some done on this dress in the morning.

Posted by Nancy Winningham at 8:41 PM

I will be waiting to see how your outfit turns out...good, I am sure. Gerry

No ease at the waist!?! This is a revelation for me! I've been making sure I have ease, and then wind up with a dress that is too big. I fear having no ease in a non-stretch garment. Thanks for sharing Kenneth's advice! Excited to see your finished product!

I'll be following your posts closely. Ever since Robin @ Yarn Crawl did hers, I've been tempted by a strapless dress but I'm very fuzzy on how NOT to have a wardrobe malfunction in such a thing, LOL!

OT: would you mind telling me why there isn't Name/URL in the Identity options? Spammers?

Lakaribane, I don't know why the identity doesn't let you put name/url. I changed a couple of settings, so hopefully that will fix it. It always comes up on my screen.

As far as not having a wardrobe malfunction, since I wear a DD, this is a major concern of mine too. As KK says, this is a bustier you could play volleyball in! I'm hoping that will be secure enough.