I am doing the "Endless Combinations" contest at PR. I haven't done a contest in a long time, because I am too competitive (with myself) and tend to put too much pressure on myself. But, this time, I am not going to do that and I am just entering the contest as a motivator to move some fabrics OUT of the fabric closet. For this reason, I am ALSO going to enter the Fabric Stash contest at PR in January. Now, I have no inclination to win that one because I want to take my time to make some nice things and will be doing that simultaneously with the SWAP - which I will write more about later. I will, however, be making everything for the SWAP from my stash. For those of you unfamiliar with the "swap" there is absolutely no swapping going on - it's just an acronym for Sewing With A Plan/Purpose.

Anyway, for the EC, you make one garment, and the second must go with the first. The third, and each subsequent garment must go with a previously made garment, but they do not necessarily have to all go together. I am starting with a plan, but not sure which direction I'll take.

I posted my fabric and patterns in the last post. I have made the skirt, and the pants are finished as well.

The skirt is McCalls 5523. I am really happy with the pattern and am sure i will make it again. I need to take it in just a little bit more at the waist, though.

Next I will make the ivory top. The other day I bought Butterick 5387 and planned on using that. The fabric that I have is a thin silk blend sweater knit from Casual Elegance. But, after reading all of the reviews for this pattern on PR, I've decided against it. I like the line drawing, but am not so sure I am that enamored with any of the finished tops I've seen. Also, everyone has said that the neck treatment is a pain. I will probably try the top in the future, but for now, it is going on the back burner. Instead, I think I will be using the top from the FSG twinset, and just changing the neck a little bit.

Posted by Nancy Winningham at 2:24 PM 7 comments Links to this post

Well, I've decided on a break-up. A break-up with Burda magazine that is. I have loved my Burda magazines and still do. But, in the last year I have not made a single thing from the 2010 issues. Not only that, I am unhappy with the new printing of the patterns (twice as many pieces on a single sheet) and the price has gone up. I really considered giving it another year, but really, there has not been much in the last year that I want to make. I have about 3 years worth of the magazines, so I have plenty to keep me busy. Besides that, I also have pattern boxes full of Vogue, Simplicity, McCalls, Butterick, New Look, and KwikSew plus numerous independents such as Fashion Sewing Group, La Fred, Pamela's Patterns, Loes Hinse, etc. Do I really need to buy MORE patterns that I have no where to store? I think not. I will miss getting my monthly Burda fix, but I'll get over it.

Next Decision - I've decided to enter two contests. The Endless Combinations on Pattern Review which is currently running, and the SWAP (Sewing with a Plan) on Stitcher's Guild. That one doesn't start until the end of next month. I haven't done any contests for a while, but for me they are good motivators.

So, here is my plan for Endless combinations

First - the herringbone pants. I will be using the Loes Hinse Oxford Pant pattern for these. I saw these pants in her shop and really liked them. I really like this herringbone fabric. I had to buy extra because it was in pieces and there wasn't one piece long enough to make the pants. I will use the extra to make a skirt.

Next, an ivory knit top. I haven't decided which pattern I'll use yet, but it will be simple with long sleeves.


Third item will be a skirt from the herringbone fabric. Again, I don't know which pattern I'll use, because it will depend on how much of the herringbone I have and what shaped pieces are left over from the pants.

Next up will probably be an orange T shirt. I'm planning on using the Marcy Tilton pattern for those. I will actually be making the one that is shown in orange

After that, I will be making the Garbo jacket from the Green Moss fabric. It is a bulky sweater knit. Loes also had these made up in her shop, although she used the Biarratz pattern, but the tweak made it look just like the Garbo.

The last item I will probably make are the Hepburn pants. I have never made pants like these before, but I'm going to give them a try. One of the views eliminates the paperbag waist, so I'm sure I'll be doing that.

I have other items that also want to make to go with this plan, but I always want to do more than I have time to do. Also, since the SWAP will be coming up soon, I will have to take a little break inbetween the two just to get other non-sewing stuff done!

Posted by Nancy Winningham at 7:01 PM 6 comments Links to this post

A couple of new tops 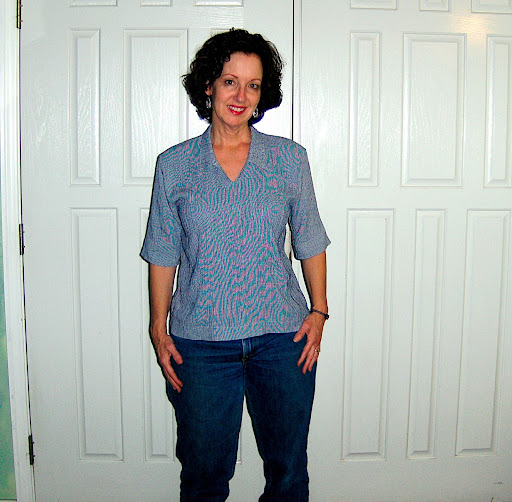 I decided to make this top again. I first made it (with the tie neck) about 3 years ago. It is still the shirt I grab most often on the weekends. The first time I made it in a natural colored linen and it is just so super comfortable that I love it. I decided to try it again. I want to figure out which clothes I gravitate toward most often in my wardrobe and why. Is it the style? The fabric? The color? the fit? I want to figure this out so that the clothes that I make will be things I will wear all the time. This time I made the top in a crinkle rayon. It is a mini navy and white houndstooth, but it's really hard to see that in the picture. I KNOW that I have to wear fabrics that feel good. I have some cute tops that I purchased over the years that I never wear just because I don't like the way the fabric feels. Rayon is one of my favorite fabrics. It is usually soft, drapes well, and breathes. This is the old Textile Studios Marseilles top pattern. 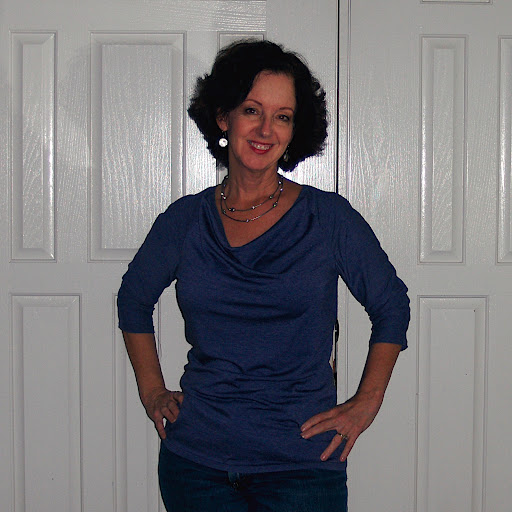 The other top I made this week is a Marcy Tilton pullover. It is Vogue 1085. The fabric is a deliciously soft rayon knit that I bought at Josephine's when we had PR weekend in Portland. I'm really happy with this top. It is interesting that this top has a little weight in the front to pull the neckline down against the body. It really works well. 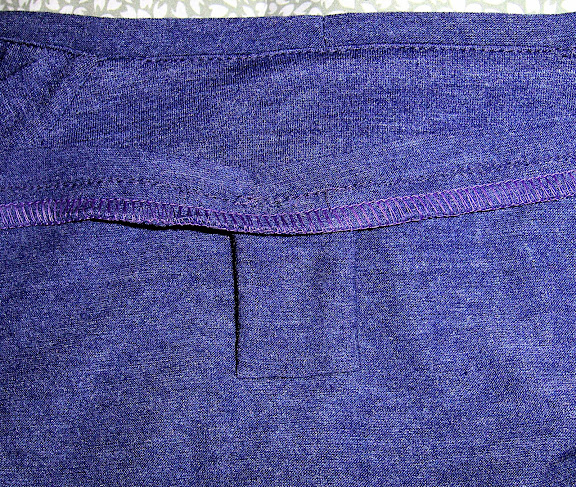 Posted by Nancy Winningham at 8:59 PM 5 comments Links to this post